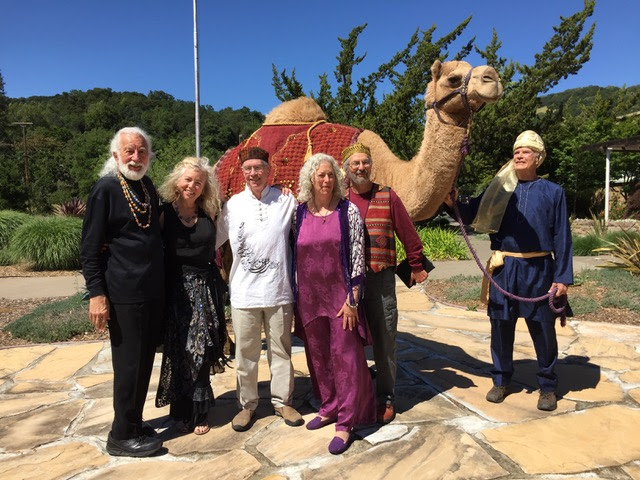 Kay and I sit beside a pond outside her home in an old Sebastopol apple orchard, close to a beautiful, flowering garden.

Kay had recently attended a ritual performance by poet Rosemerry Wahtola Trommer, and musician/educator Kayleen Asbo, who collaborated in the creation of pieces based on Vincent van Gogh’s paintings. The event was held at St. John’s Episcopal Church in Petaluma and was filmed for eventual release on YouTube.

Kay began: I stand by the urgent need for ritual, the sacred container of creativity. Kayleen’s and Rosemerry’s invitation into the well of grief and love was so profound and offered with such beauty. It reminded me that we can make a certain amount of “progress” excavating our own souls where the shadows of grief and trauma live, to make room to hold more love and more of that palpable shared sense with all beings. Ritual gives us the feeling of being held and guided in those depths. By and large, our culture does not acknowledge old age, sickness, and death. It is kept off-stage somewhere — and at what expense to our collective soul and being! We who excavate do so not just for ourselves but for all beings — our shared being.

I love Inanna’s mythology. She voluntarily goes into the underworld to visit her sister and sheds all the worldly symbols of her life at a series of seven gates. Finally, she finds her sister, Ereshkigal in the agony of childbirth labor. Seeing Inanna, her sister promptly kills her and hangs her from a meat hook. Ultimately, Inanna is rescued by an intervening god and returns to the world regaining her earthly raiment as she travels back up the seven gates to return.  Transformed by darkness and death, her light is more radiant from the deep excavation she has lived. No doe-eyed innocence, but a conscious choice to shine in the world. Such are the gifts of ritual — we choose to make a journey into ourselves. We choose the liberation of depth work.

Sometimes, however, we are snatched into the darkness like Persephone stolen by Hades— when our child or our partner dies, our home is lost to fire, or our body is struck with illness or injury. One way or another, we all make the journey into darkness. Ritual gives us the language to understand and integrate our losses and heartbreak.

Rituals can express in many forms. Of course, there are traditional rituals across many cultural and religious traditions, but we also have universal means of participating in archetypal language, such as when we share music, poetry, and storytelling — particularly words offered in the oral tradition of speaking “by heart” rather than reading. These are also essential elements of group rituals. The work I do with reciting poetry for Rumi’s Caravan is my contribution to this language of healing and blessing for our wounded world. 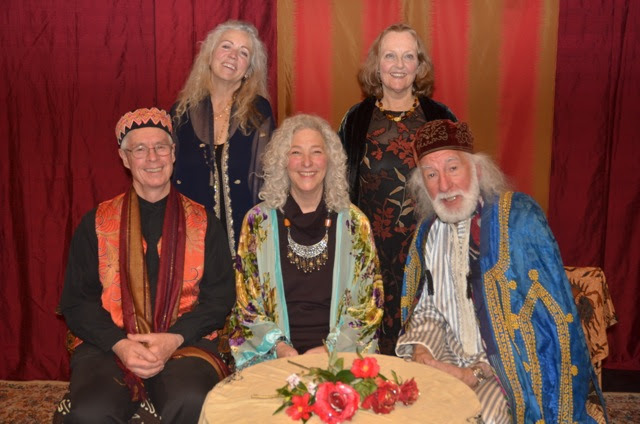 In answer to my question about her family, Kay responded, I had two fathers. My birth father was a theater director in Berkeley who founded The Barbed Wire Theater, and worked on a script, The Cage, written by an ex-con with a cast of ex-cons. My step-father was a high school physics teacher and my mother was a creative who had to make sacrifices because she became a mother at eighteen — abandoning her own education and interests to support family life. It was painful for her when I pursued a livelihood in jewelry. She once said, “What makes you think you get to be one of the lucky ones?” I cried that night, for her losses so starkly expressed with those words.

I’m interested in everything. While in college at San Francisco State, I was a French major, a science major, a film major, and a Women’s Studies major. I left college with five years’ worth of credits but no degree! Women’s Studies was taking off in 1971 and the campus was so alive with passion for the renewed vigor of the women’s movement.

All my life I have been interested in investigating new things. I started making jewelry in junior high and continued through high school. I mostly made beaded curtains and earrings. My grandmother even sold some of my earrings at I Magnin in Hollywood. When I went to college, I forgot all about it. During my first year, my parents divorced and my father threw out all my belongings, including all the beads and tools I’d collected. It was very traumatic. 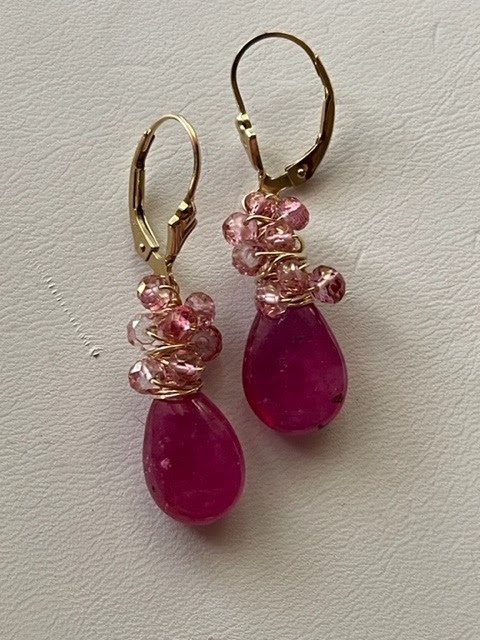 I didn’t come back to jewelry until my early 40’s. I was managing a company and started giving jewelry for employee gifts that one of my employees handmade. I noticed they weren’t very well made and I had to repair a few pieces —and that was it! I was on fire, and by 1999, I had my wholesale license. For many years, I have had to work at various part-time jobs to supplement my jewelry income.

Before I rediscovered jewelry, I worked in TV as a camera operator, stage manager, and news director. I also did some corporate jobs. I had a video production company with a partner for several years. We scripted, did the camera work, and post-production. One of my part-time jobs was in the office of the Sebastopol Charter School which my daughter attended. I got a grant and started a library for the school. My grandmother had been the head librarian in Mt. Vernon, Illinois. I could feel her looking over my shoulder as I worked. 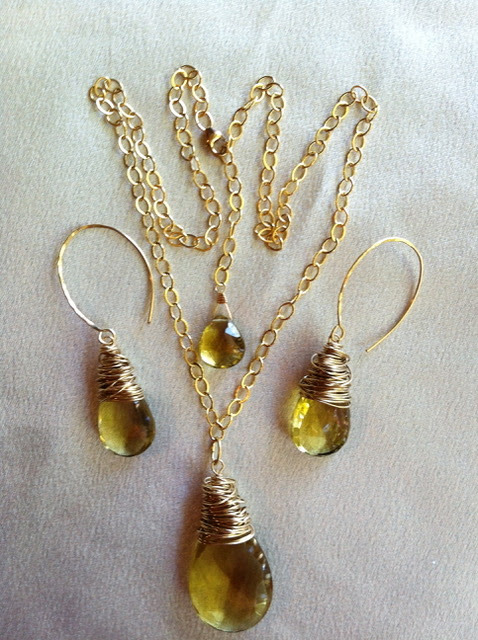 I’ve always been an avid reader and grew up without TV, but I wasn’t a poetry fan until I came across David Whyte. His writing and sharing of other poets was an introduction to poetry that I liked. He set my soul on fire and I took many of his workshops in San Francisco. A few years later, I saw a flyer for Rumi’s Caravan in Sebastopol for Valentine’s Day performance. It was love at first sight.

Rumi’s Caravan is a local group with a world-renowned selection of ecstatic poetry that they recite by heart. (All their events are fundraisers for a variety of non-profits such as The Ceres Project, The Center for Climate Protection, and The Laguna Foundation.) Larry Robinson, its founder, was auctioning walking sticks that he’d made with a Rumi quote etched into each one and an added resin head. Kay showed me her stick. Worms had carved wandering trails into the wood.  My daughter, Hallie, was using it in a play and it fell and cracked the resin head. I took Larry out to lunch to thank him for repairing it, and he invited me to a living room poetry salon. And that’s how it started. I went to my first poetry salon with two David Whyte poems Id memorized. After a number of salons, Larry asked me if I would like to join the Caravan. That was about fifteen years ago.

The repertoire of poems I carry is like a history of spiritual exploration! I have always chosen poems that lead me into questions I need to consider and pathways I am ready to walk. Recently I’ve started making a list so I can keep track of all the poems I have committed to memory over the years. So far, I have found more than two hundred poems I’ve worked with. At any given time, I have 35 to 40 pieces that are fresh enough to recall and speak by heart. Sometimes, you only need a snippet to season a conversation.

Larry Robinson sent a Rosemerry Trommer poem as his e-poem one day, so I googled her and signed up for her email list, and then for a workshop. Larry provides such an incredible resource for poetry. 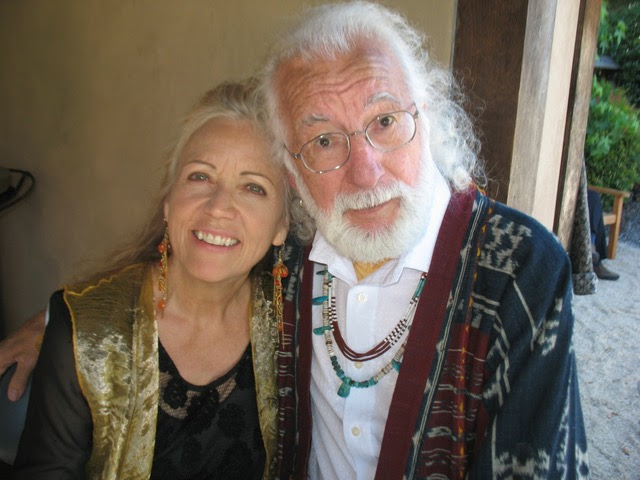 I asked Kay about her very feminine approach to poetry and life. Kay responded, It’s okay to pursue beauty on the spiritual path. I think I’ve always felt about my deep femininity that it was somehow superficial. But the more I explore it, the more I find that beauty is one of the doorways to God. Although often misused in our culture, it can be a visual form of the numinous, of the unsayable. As it’s one of the ways I experience the world, I can be transported by beauty into grace. The reason I felt guilty was because I didn’t understand the yin-ness of it. Beauty is not active, there’s such softness, openness, and receptivity. Yang, the masculine principle, is easy to point to: “I did this, I made that.” A lot of feminine art is witnessing, reflecting, holding, listening. And there’s such tenderness.

I had thought I was already naked.
I had thought I had shed
the mask, the robe, the dress,
the flimsy garments that tease.
I thought I had nothing left
to remove. Then came
slipping out of my laugh.
Taking off my smile.
Dropping my role, my hope.
Losing what I thought I knew.
I could never have said yes to this.
It is happening anyway.
I am less myself, only more.
There is a shawl of compassion, though—
its threads made of sunrise gold.
This. Whoever does the undressing
wraps me now in this.

So much of our lives are shaped by activities and the people we encounter. When I do meditation retreats there’s the opportunity to shed. In the silence, I encounter myself in a deep way and renew the connection with my being. I want that to shape me and have a lasting impact on my life. It’s important to let the richness sink in all the way into the bones. Otherwise, I can drift off course, get frustrated, impatient, too busy, wandering away from what is essential.

You can learn more about Kay’s gorgeous jewelry at this link, and about Rumi’s Caravan, including videos of live performances here. 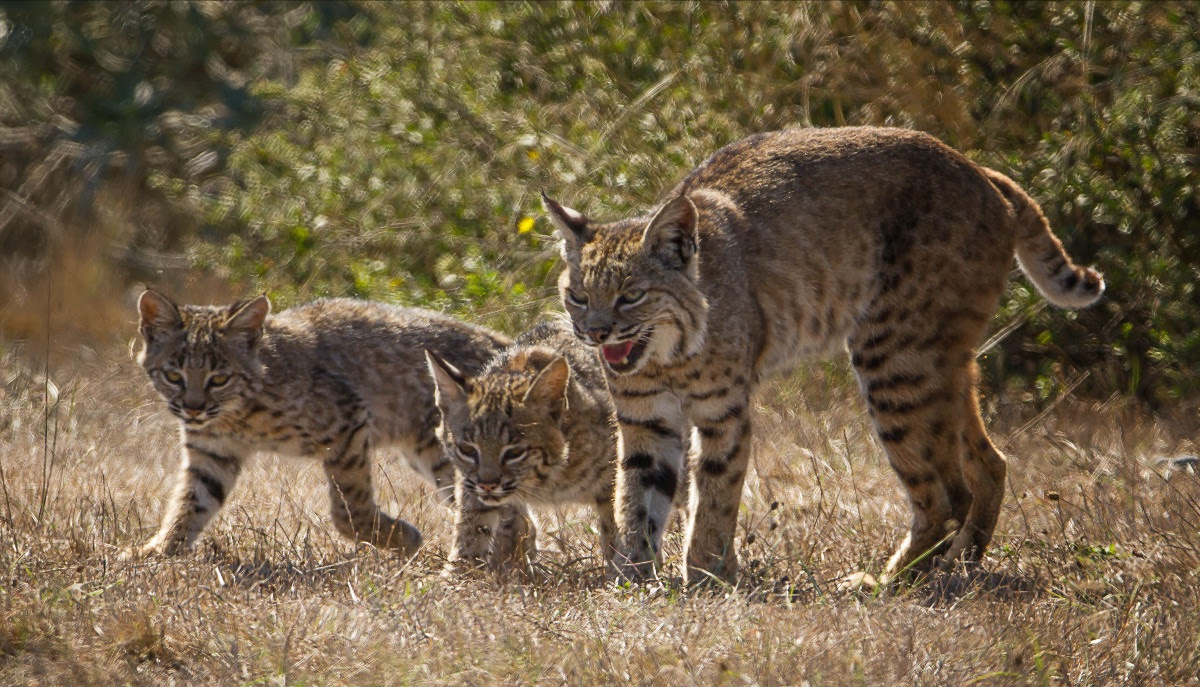 Bobcat with her young. Photo by Benedicta Justine

In the Old Town of Kandahar

In the old town of Kandahar
a woman always brought
two baskets of figs to the market
one to sell, and one to give away
One for my children she said, beaming, and one for Allah

I did not know exactly what she meant
though felt she did, and so I trusted

From the cut of my clothes
and soft leather of my shoes, she knew
the color of cash in my pocket
yet, we bargained good-naturedly at ease
over the price of a fig
from the basket for her children

She would take nothing, though, for those in Allah’s basket
where the sweetest were shared without hesitation
and the grateful eyes of a hungry beggar
could become an angel’s blessing

When I ventured to sample from Allah’s basket
the woman looked into my eyes, said earnestly
You must eat slowly; that one you eat for us all

In a flash I understood what my reason could not –
Allah’s figs, the market, and the world
were all the same to her