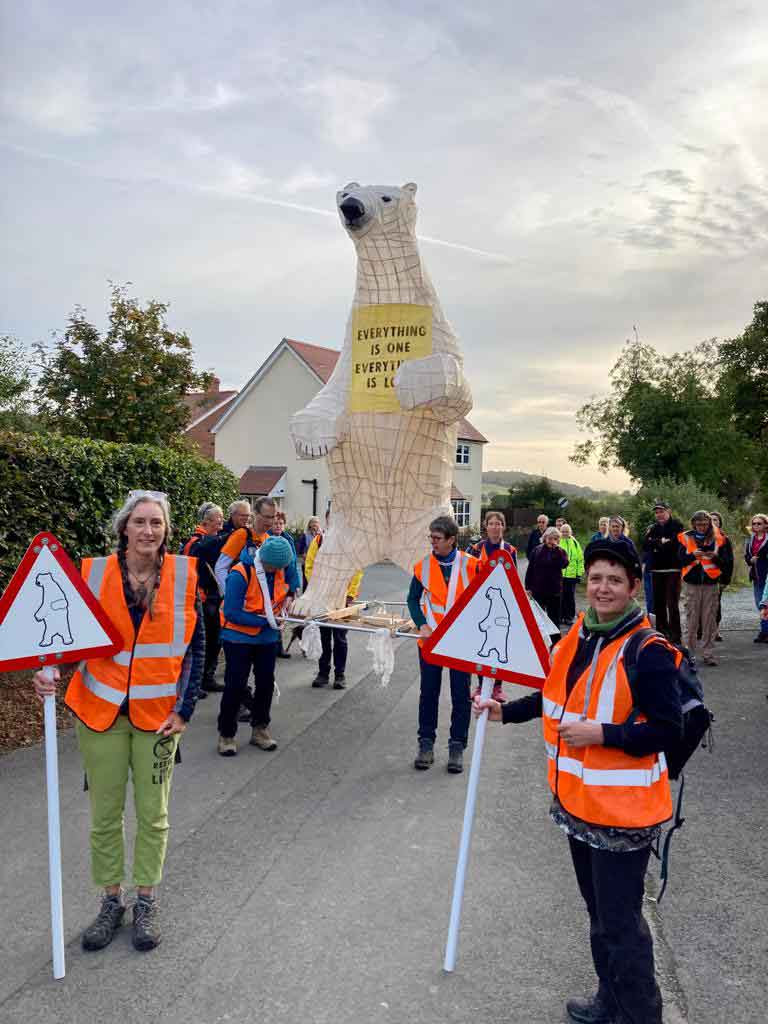 I spoke with Dorothea Linder, a dear friend in London, by Zoom in November. My curiosity had been aroused while listening to a song and watching a film of it with Clarion the Polar Bear. If you watch it now, I think you’ll find the interview will make more sense and be more enjoyable! Just click on the photo below. (https://vimeo.com/user6688286/review/640342506/dfe50c9933) 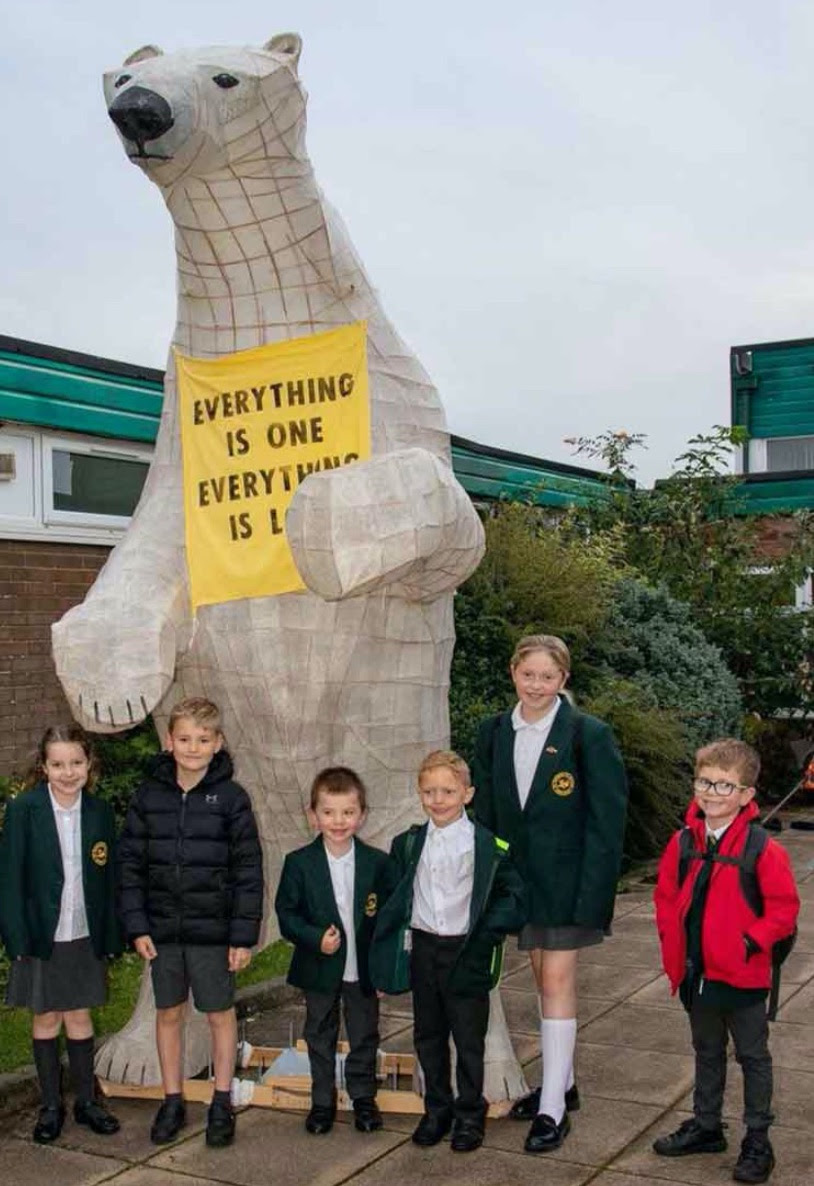 Clarion the Polar Bear—the creation of Bamber Hawes—stands at 10 feet tall, although he is taller when carried upright on a palanquin by four people, as he was for most of the 22 days of a pilgrimage from Bamber’s home village in Shropshire to the COP conference in Glasgow, over 306 miles away!

There’s a tremendous amount of fascinating info and footage on Bamber’s site, Clarionthebear.fish, some of which I’ll interweave with Dorothea’s account.

Dorothea: The way Bamber writes about it is so full of love and devoid of anger.

I was over the moon with his website and his bear. Clarion was so alive for me. I woke up with him, ate with him. I’m so in love with the bear. I felt so enthused.

I thought there should be a song with it. I’ve never written a song but that evening, I wrote down these simple lyrics. I’m a friend of Jo Collins, the director of the youth theatre, Chicken Shed. We met twenty years ago when she came to me to do qigong. I sent her the lyrics knowing that when it’s right for her, the music is just there. She hears it and writes it down. Two days later she sent me the audio with the song.

I sent it to Bamber, and he wrote back two days later, “I like the song and I’ll put it on the website.”

I sent it to our meditation group and Gillian wrote that it should go out into the world. Two videos were made for the song, but I wasn’t totally happy with them. Someone we knew tweeted it to Greta Thunberg and Chris Packham. I hoped it might reach the conference.

“Wake up, wake up,
see and feel that
everything is one…”

A friend of Bamber’s, Nick Edwards, was filming the walk. So, I asked him if he would make a video to go with the song. He agreed to do it. He edited footage he already had while listening to the song. The film is in colour, but Nick chose to mute the colours while the bear seems to be walking through the landscape. I interpreted this as a very subtle artistic device to indicate the bear’s (our) sadness. Also, throughout the film, the bear as a symbol for endangered species is towering high above people, including Bamber, his creator. This also points to Bamber’s humility. The project is not about him but about the cause which it serves. What a truly fantastic, wonderful film. Thank you, Nick. 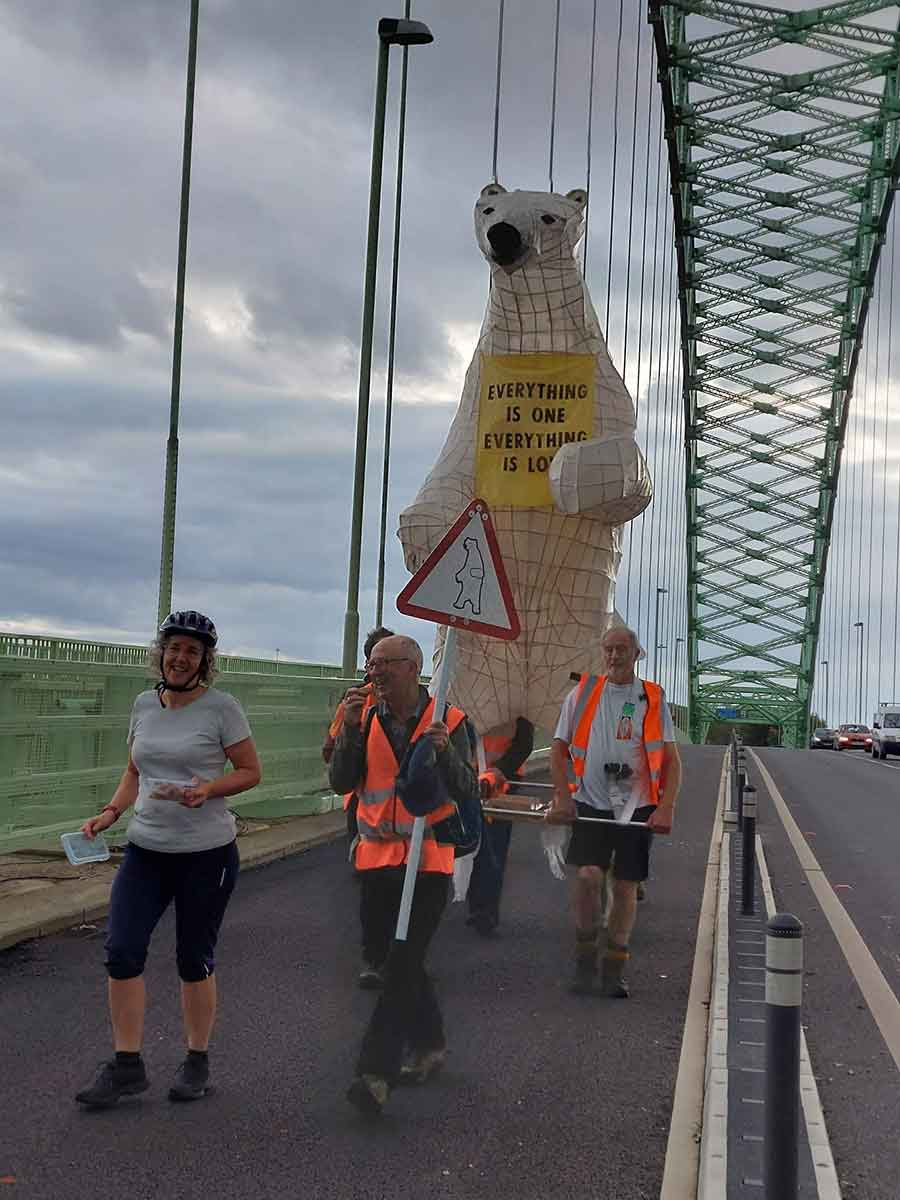 I was inspired to join a post-pilgrimage Zoom call with Bamber and others a week later. I learned that two friends who live in Cheshire had joined the pilgrimage for a day when Clarion passed through.

Terence Moore continued: The whole energy of the project carried people along. The joy was infectious. It affected drivers and everyone. It continues even today when we share with friends who ask, “What have you been up to?”

Almuth Tebbenhoff: There was something magical in the bear’s face.

Bamber: We covered about sixteen miles a day. We met Quakers along the way, and these were very social days for me when I’m normally in my workshop all day. It’s changed me.

A teacher from the Dollar Academy, outside Glasgow, contacted me. They wanted Clarion and built an iceberg from crosses for Remembrance Day.

Next year COP takes place in Alexandria, the first one in Africa. I’m considering ideas including making a dodo for each country.

Alan Craxford: The number of people who helped along the way each day and didn’t want to be paid or want anything in return, is a reminder of an earlier way of life.

Jane True: I was so deeply moved by Clarion and the pilgrimage. I’m rather tired of the clamor on the streets and in the conference. Clarion was where the magic was. I felt that it was almost like in Lord of the Rings, where everything that happened had a deep meaning reaching into other worlds. 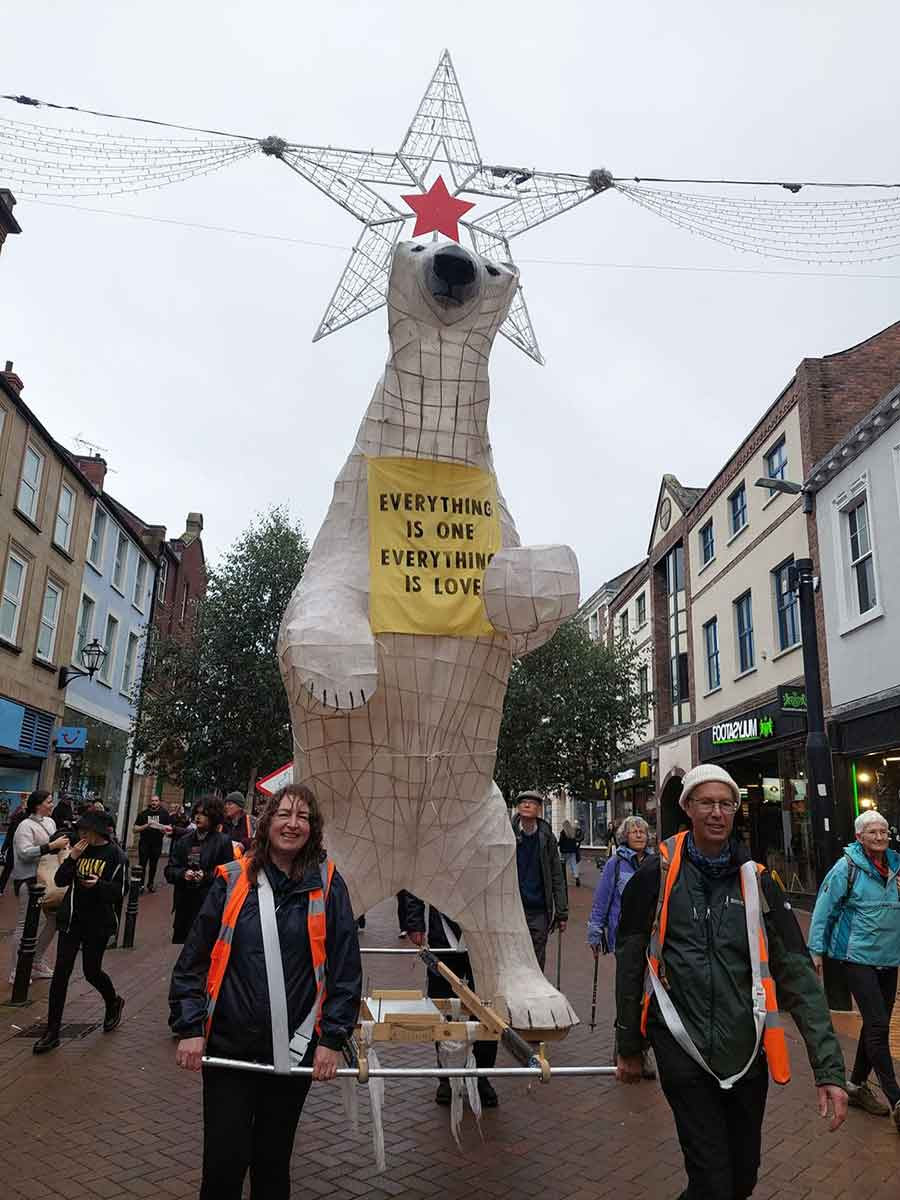 “Clarion fitted in well with the Christmas decorations in Carlisle.” Bamber

THE INTENTION FOR THIS PILGRIMAGE

Our aim is to come together to walk, to talk, to connect with each other, and to connect with the landscape by moving through it slowly, admiring its beauty and grandeur. We will be positive and kind, we will smile and laugh while being serious and we will build active hope as we walk.

Walking to the climate talks will not change the world ~ but I can think of nothing better to do to show the earnestness of my belief that we must learn to talk together and build community, only in Oneness will we make a better more just world… 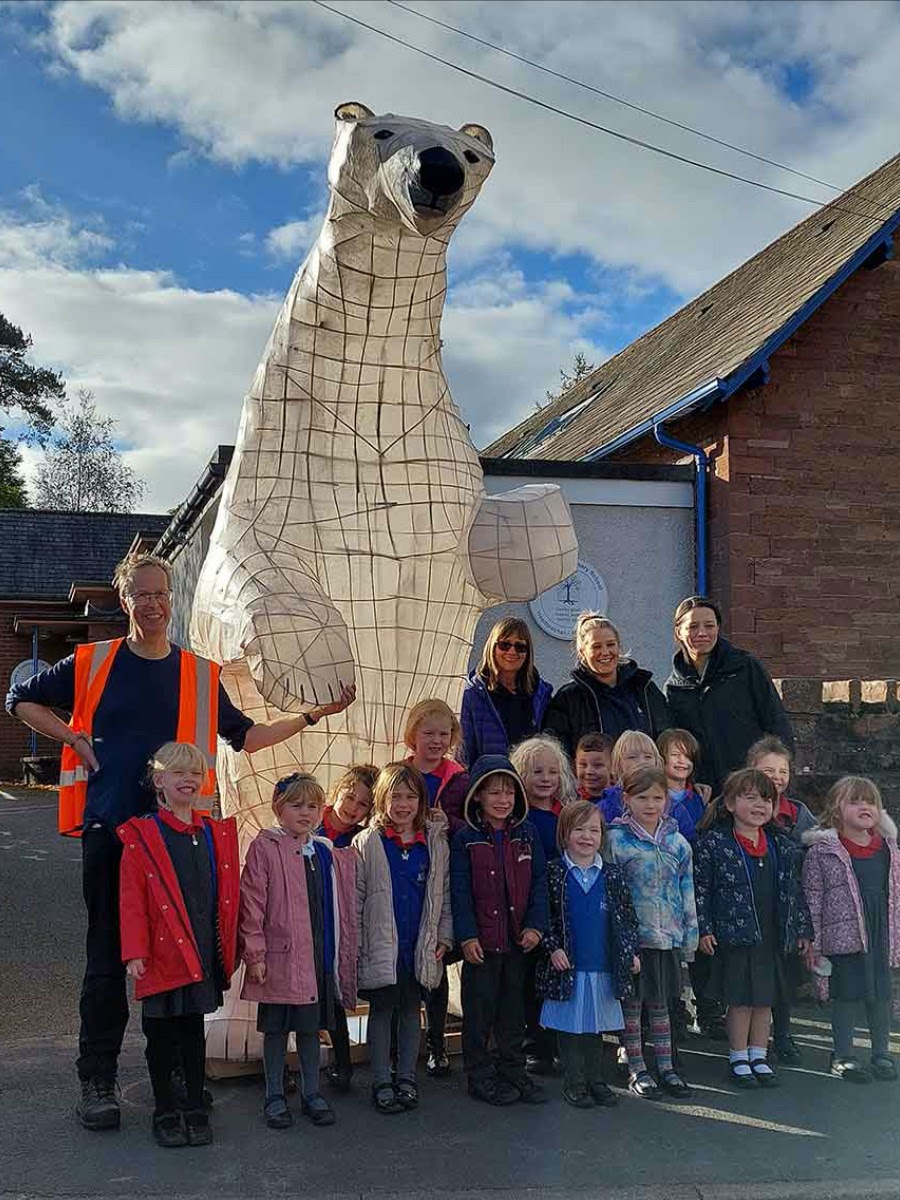 Carrying a sculpture of a polar bear is not going to save the world. I do know that.

The heads of state and other delegates will most probably be completely unaware that I have slogged 306 miles to get to COP26 and found others willing to help me.

So, what is the point?

…Perhaps this penance-like pilgrimage is not going to change the world, but I think it will change those who take part.  These days it is not often that we take part in tasks together.  During this time of Covid many of us who haven’t been on the frontline of the NHS or the service industries, have become quite insular.

It will not be a shouty, banner-waving demonstration; but a day of talking, walking, moving through your local landscape, whether it is beautiful countryside or built up. To enjoy the company of others, enjoy the sweat, the toil, the rain, and hopefully be still smiling at the end.  We will have a purpose ~ to get there with the bear, together ~ however ridiculous a task that is.

I have a deep personal conviction that there is no quick fix to the climate crisis. If we are going to stop carbon levels peaking at 1.5 or 1.8 degrees it is only going to be done if we see the world as a whole, not as individual countries.  We can not do this huge task and not think of those in the most delicate climate positions as not being our kin…

You may enjoy Bamber’s log of Clarion’s progress. I love the place names, for example, Longden to Wem (Day 2), Bulkeley to Kingsley(Day 4), Sadgill to Askham (Day 12—includes repairs on Clarion and a short video, ‘Setting off on Gatesgarth Pass’). 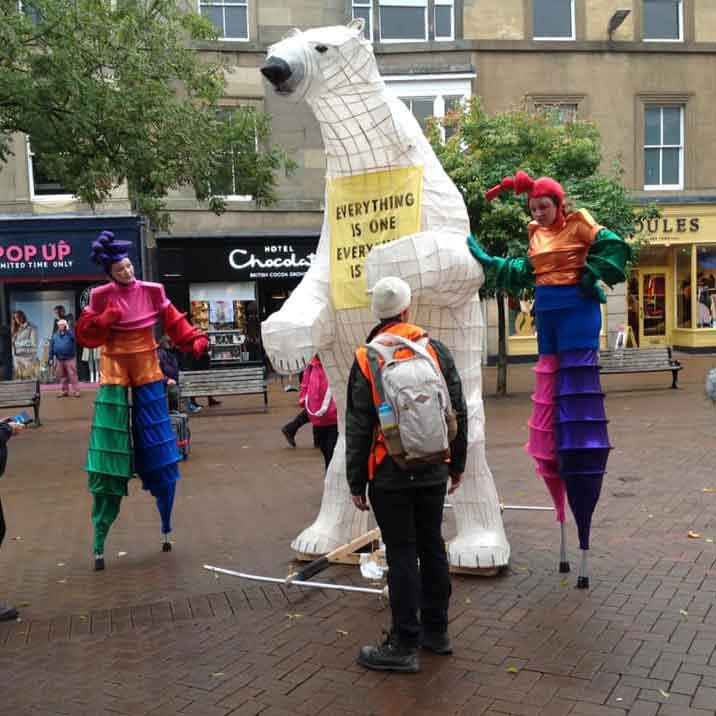 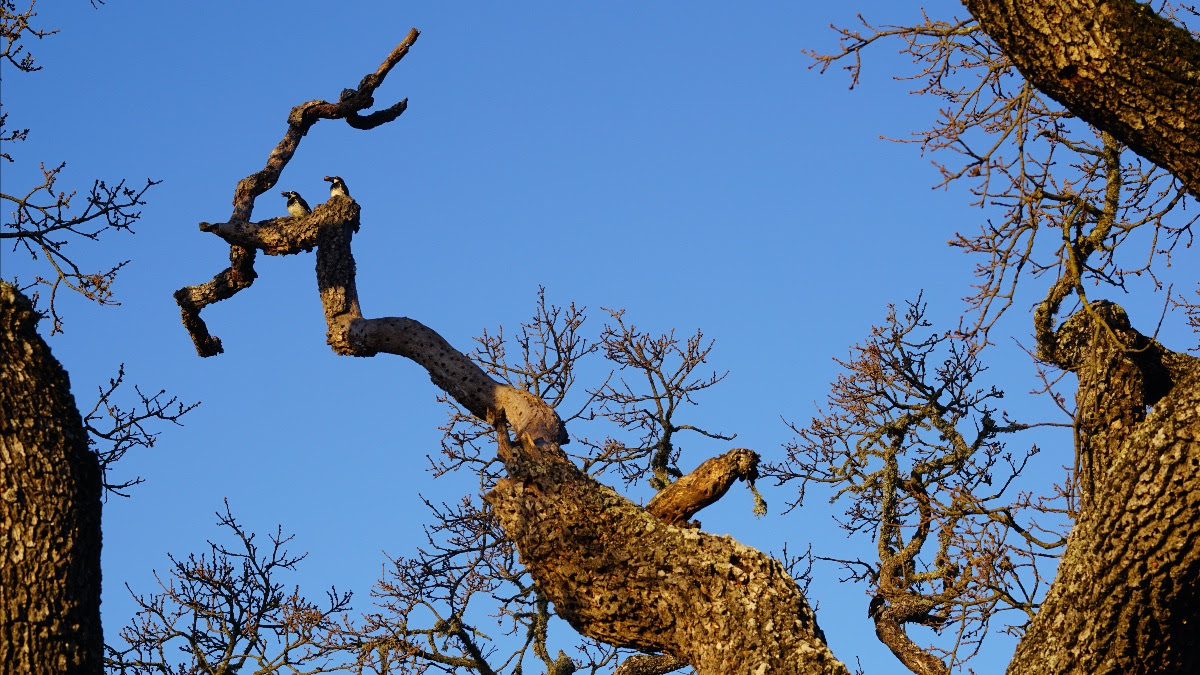 Written some years before the pandemic, this poem was first published in ‘Birdland Journal’, August 2020.

I
It will happen unplanned
like the gopher burrow
that diverts the waters
rushing down my hillside
from their appointed channels
to a flat patch―
where pools now gather, sit,
trickle through layers of loam
and rock to the aquifer
that feeds the well.

II
When you were a child
and someone hurt you
did your petals close,
your shell snap shut,
did you burrow underground?

And what do you believe
will coax this wounded Earth
to show you Her face
in all weathers?