↓ Skip to Main Content
Home › June 2020 | I focused on the importance of science in informing management. I learned from Starker Leopald that you can’t plan anything if you don’t know the FACTS! We needed the info first. Interview with Sarah Allen, Marine Biologist and Conservationist – Part II

June 2020 | I focused on the importance of science in informing management. I learned from Starker Leopald that you can’t plan anything if you don’t know the FACTS! We needed the info first. Interview with Sarah Allen, Marine Biologist and Conservationist – Part II

I was in my early 40’s and was told about a Park Service job – Inventory and Monitoring in the Regional Office. I was hired for this new position in San Francisco, and landed exactly right. It was UC Berkeley who influenced the science that the National Parks were to use. I grew the program over two years. There was a Government downturn and they shrunk the Regional Offices. There was an opening in the Point Reyes National Seashore for a Wildlife Biologist and Geographic Information System (GIS).

I had done GIS at Berkeley. At the time it was cutting edge. I had the skill set. People didn’t know what animals were present. Biodiversity studies were starting to take off in parks with the influence of E. O. Wilson and Peter Raven (botanist/ecologist).

The Mount Vision Fire started two months later in 1995. (It burned for 13 days.) We were doing a first on mapping and tracking the fires with the California Office of Emergency Services (COES). Helicopters equipped with GPS took readings and photographs. I worked with COES to download the info every day to show the Press the boundaries of the fire.

After the fire, we began a restoration program with Federal help from the Burned Area Emergency Response Funding. Everything needed mapping—including endangered species (Northern spotted owls, for instance), rare plants, etc. We had concerns about invasive species and where fires had damaged wilderness areas. We composed a report to get funding to reduce the impact, remove (bull)dozer lines, and reduce non-native plants. We really put conservation and restoration into practice on the ground! 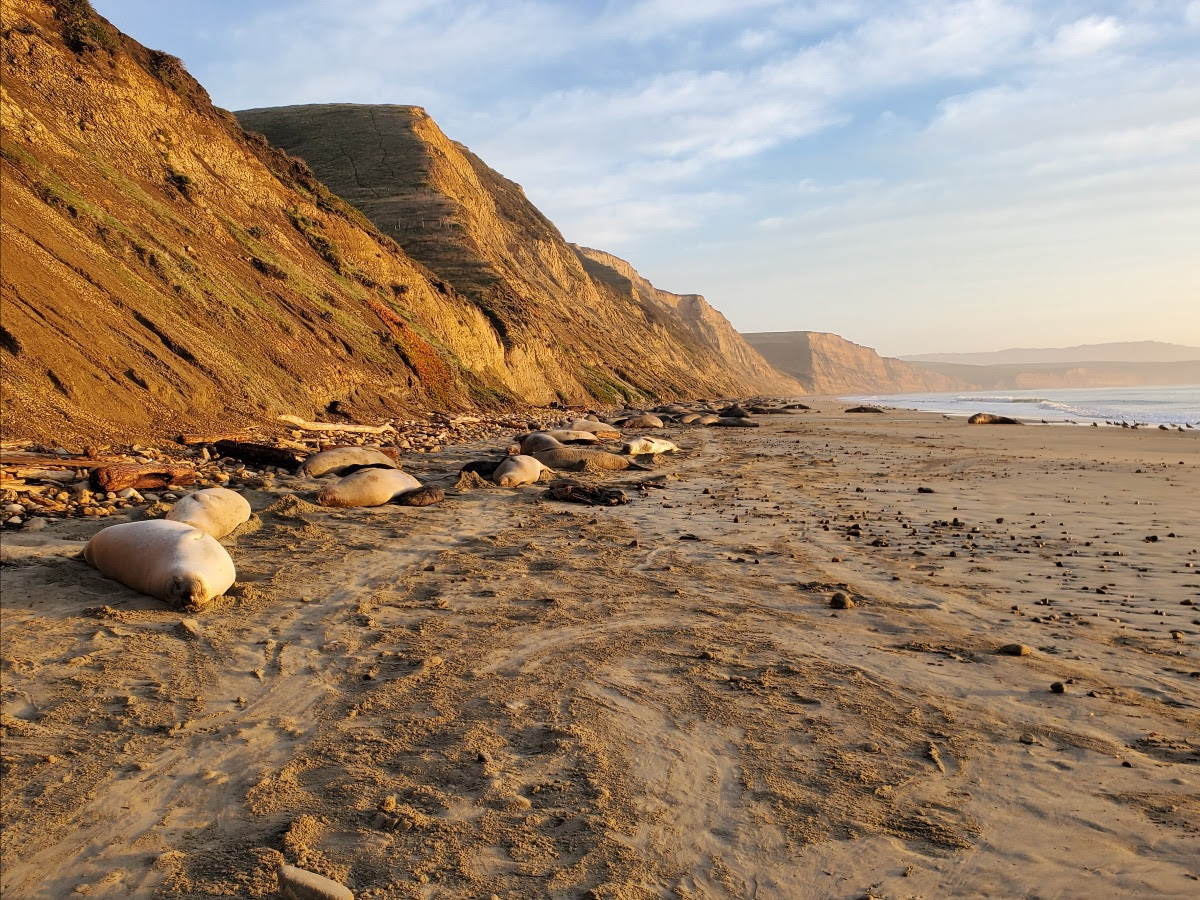 In the meantime, I trained volunteers to continue monitoring harbor seals and elephant seals and I compiled reports from the data.

The University of Santa Cruz (UCSC) led much of the research on elephant seals. A colony had established itself on the small island in Año Nuevo State Park in the 60’s. UCSC researchers tagged the seals with satellite and sensors that could withstand great pressure to learn more about their lifestyles at sea.

Both male and female elephant seals can dive over a mile deep and remain under water for up to one and a half hours.

In Point Reyes we were counting the pups each year and the diseases they carried, for example those due to run-off from dairies. I was the Science Advisor for the Point Reyes National Seashore, one of the first such posts nationally. I focused on the importance of science in informing management. I learned from Starker Leopald that you can’t plan anything if you don’t know the FACTS! We needed the info first.

I was already aware of climate change. I took a leave of two months for two successive years, 1999 and 2000, and went to Antarctica to study penguins and leopard seal predation. I saw icebergs that had broken off and how it was affecting the penguins, where they had to forage for food. My mentor, David Ainley, wrote a book, The Adélie Penguin: Bellwether of Climate Change. This experience added to my understanding about how climate change is affecting the resources and how to measure that with inventory and monitoring.

I’ve had more than forty years of studying harbor seals and elephant seals and can start seeing the effect of climate change on these species and others. You need long timelines to observe climate change. Monitoring is not “sexy” or always maintained very well. 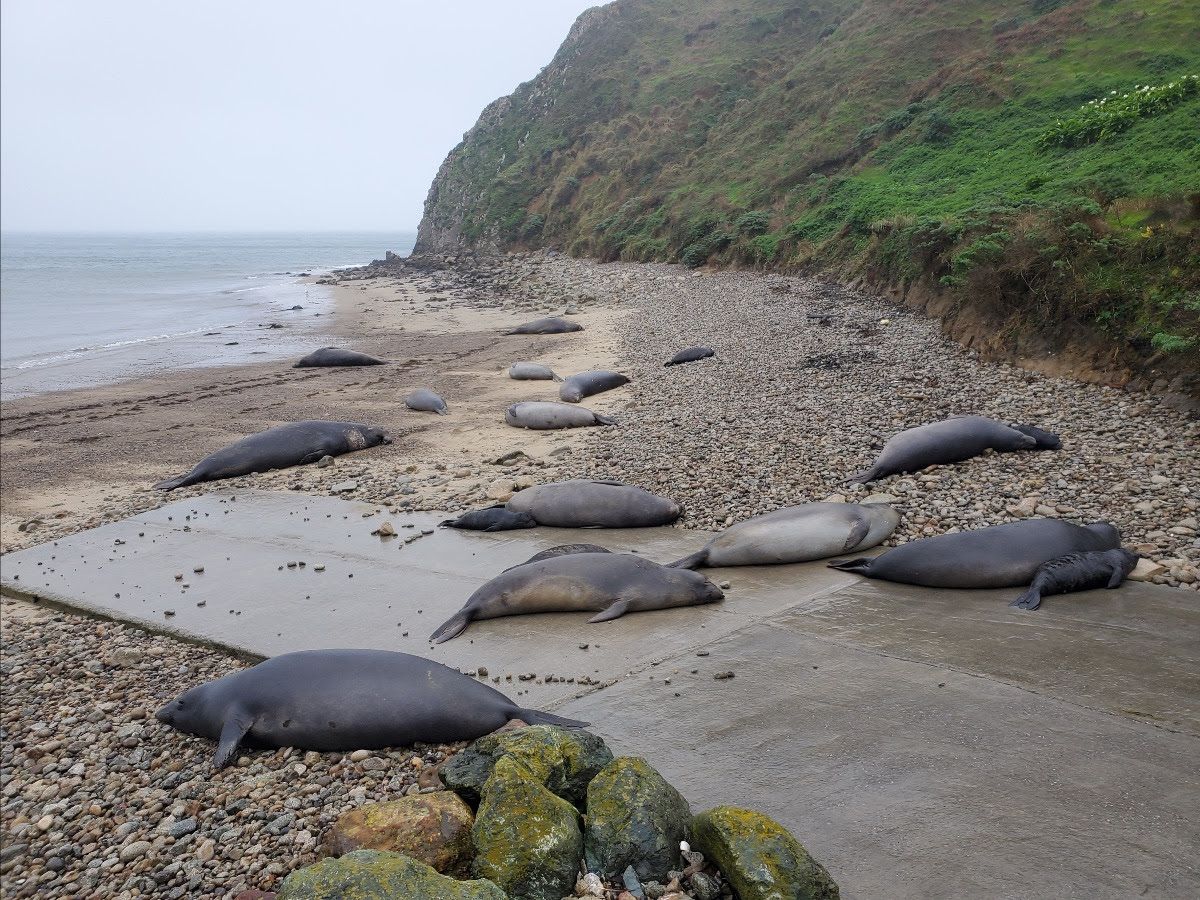 In 1982-83 we experienced the first intense El Niño event. It took a while to realize the effects on marine wildlife. 1998 was a big El Niño year and female harbor seals skipped giving birth because there wasn’t enough food to carry them through the pregnancy. Now the water’s warmer and there’s less fish for them to eat. Elephant seals are affected differently. The winter storms drown the pups who can’t swim at birth. Nothing is black and white. Elephant seal females would start new colonies during El Niño years because they were pushed to find other beaches. During 1998, the Farallones colony was washed out and some female seals shifted to Point Reyes. Now they have a very small colony in the Farallones, 100 pups compared to more than 400 previously.

In Point Reyes nearly 1500 pups were born to cows in 2020. In 1979 there had been no elephant seals at Point Reyes Headlands. Now their population is growing at 2% to 3% a year. This is an example of a success story because of simple protection.

Elephant seals are more successful than other pinniped1 species along the California coast because they are not dependent on the California Current for most of their food and, instead, they dive deeper in a different ecosystem on different prey. Elephant seals dive deep off the continental shelf. Harbor seals and sea lions are tied strongly to the California Current for their food and usually dive less than 100 feet. Harbor seals generally feed on what is locally abundant and are strongly tied to superabundant species such as salmon, anchovies, and herring.

Orcas are also coming back. The system is starting to self-regulate. Fish-eating orcas have no salmon and have declined. Mammal-eating orca numbers also collapsed but are now growing again with the growth in population of gray whales, another success story.

I saw my very first gray whale in the mid-’60s at South Beach, Point Reyes. They were never seen back then. As they are mud-suckers and eat what’s in the sediment, they’re able to stay in the Arctic and feed there longer now that sea ice is absent longer in the fall.

An “overshoot” occurs in many marine species when the young don’t know how to and where to feed and this leads to starving. We expect a 50% mortality rate across the board in the first year for many mammal species. Nobody shows them how to hunt.

Orcas teach their young how to feed and they hunt cooperatively. 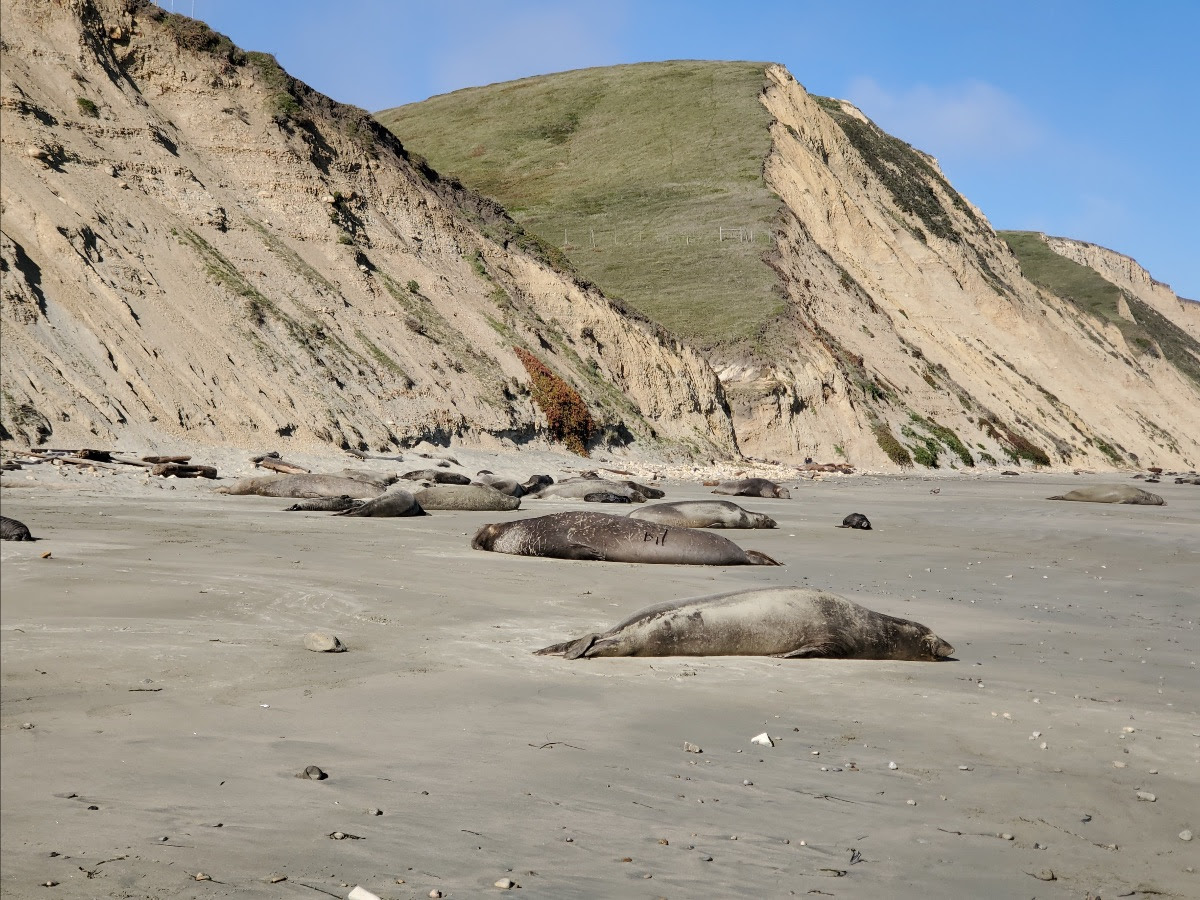 I moved back to the Regional Office in San Francisco in 2010 to be the Ocean Program lead—a new program that dealt with 24 National Parks in the Western Pacific from Guam to Olympic National Park, to Lewis and Clarke in Oregon, to Cabrillo National Monument in San Diego. I worked with other agencies to help Parks be effective in conservation, restoration and climate change science.

About six years ago, I became the science program lead for the Pacific West Region. That comprises about 68 Parks, including Yosemite. My work was to identify, promote, and facilitate scientific initiatives in the Region. The Parks’ mission is very much a part of my core beliefs. I got it from Starker Leopold, all my mentors, and also, growing up. Marine species didn’t have many champions when I grew up. In order to preserve and protect the resources for future generations you need an understanding of what you have, how to address climate change, and making the next generation literate on the issues.

I now teach a seminar at UC Berkeley on Stewardship and Science for Public Lands. It’s open to both undergrad and grad students. Its aim is to clarify for young people how to act on climate change science. We tackle themes. A lot of the speakers for the class come from different agencies. Students write papers on emerging issues during the semester.

I was a very shy and timid person. I’m grateful to my many mentors who encouraged me. I am also grateful to my husband who always encouraged me to pursue my passion. This new generation of women are a lot stronger, even though many women are still not raised to fully stand up for themselves.

1. There are three wonderful and informative short videos on the Point Reyes National Seashore Homepage about seals (pinnipeds). Sarah Allen plays a part in all three. They are Protection and Conservation of Elephant Seals; Elephants, Seals, and Lions, Oh My!; and Elephant Seals: Our Window to the Ocean. You can find them at this link.

2.  You’ll find an in-depth, delightful and  leisurely presentation of the marine mammals of Point Reyes, that  Sarah Allen gave, in April 2020, to the Environmental Action of West Marin Birding and Nature Festival at this link.


High summer winds gust and blow
reddening apples, plums, bow and
show themselves in these shaping
shimmers. A streaming rush sounds as
a troop of white clouds straddles
the hill, while up in the redwood
cluster, high-pitched trills bound and
flutter over yellowing grasses.

A swell of molecules cascades.
Once more all is fro and to, to
and fro, playful limbs sway. Yet
silence reigns— not reins the vigorous
motion in, not at all, but
the springboard for birds’ commotion,
whistling trees, a soaring vulture,
and my rustling heart―now still.