↓ Skip to Main Content
Home › March 2020 | The Paradox of Bees: An Interview with Michael Thiele

March 2020 | The Paradox of Bees: An Interview with Michael Thiele

The moment I put bees in a log hive and witnessed them there for the first time, it felt like my world had completely shifted. It felt like a door had opened that allowed me to view a different universe of bees, a different cosmology of apiculture. Once you get a taste of something—the birthright of this being, there is no return. I had to follow the gesture and that’s what I’ve been doing ever since. 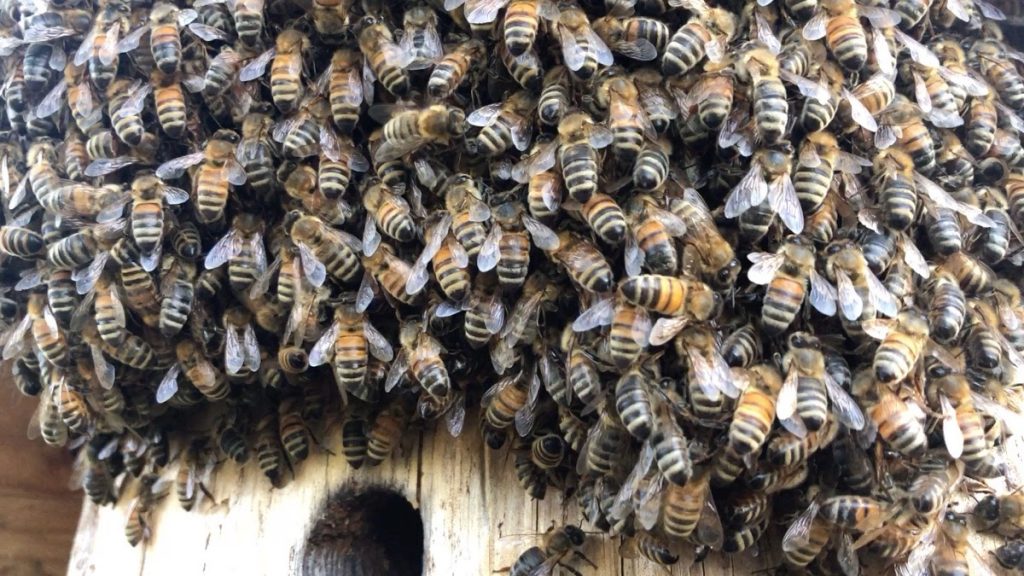 Michael shows me some of the log hives he is making in his garage. These vertical log hives will be placed on trees with ropes and a pulley system. A neighbor had some tree-work done on his redwoods and gave Michael the logs. There are wonderful short videos on Michael’s site that include: How to make vertical Log Hives; Construction of a beehive in a Living Tree; First 10 weeks of the Life of Honeybees; and Swarming – a Process of Birthing the Memory of Home. 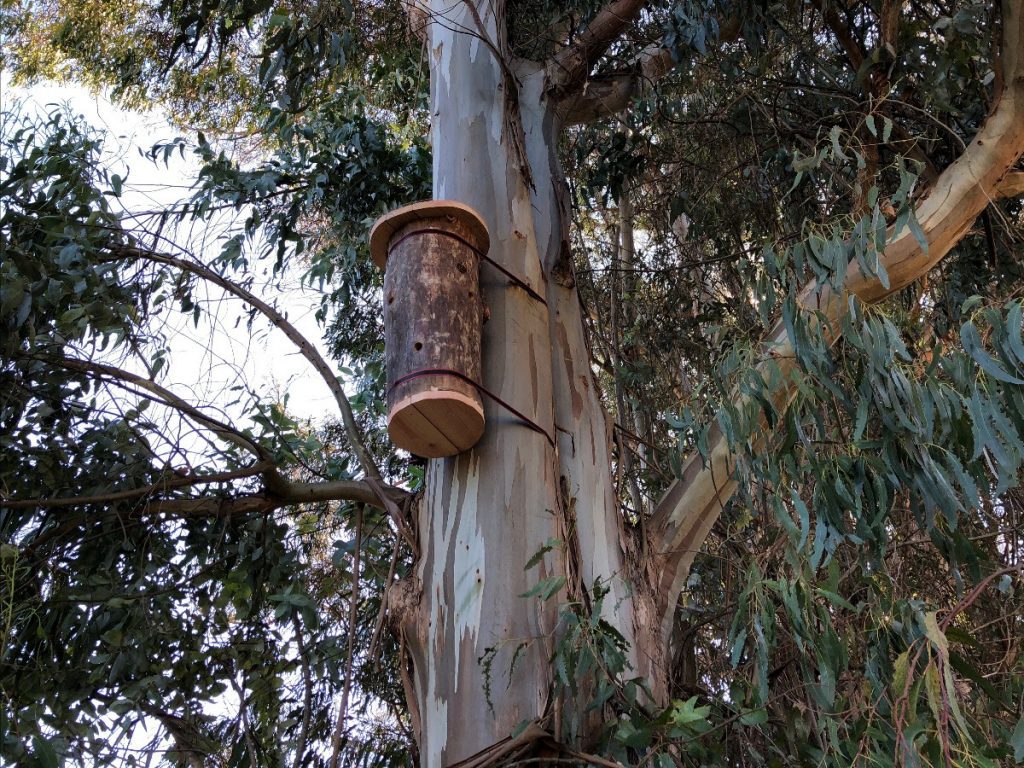 Michael invited me to sit under a sun hive. The bees were flying in and out of the hive in a stream of early February warmth. The hive was made of rye straw and sealed with cow dung. Michael explained, The dung keeps the sunlight off the straw and is a good fit for the bees. The hive was hung under a shelter to keep out the rain. It incorporates the bees’ instinctual preferences through its shape and form. Michael points to the pollen on the bees’ rear legs. Honeybees are sun beings following the sun throughout the seasons in such an intimate way. Their biggest expansion is around summer solstice, and then decreases. At winter solstice, in a four-season climate, they start growing in anticipation of forage. The sound of the bees was quite magical. It so soothing being in their presence.

Michael described other aspects of bees’ kinship to the sun. For instance, the queen doesn’t mate inside the hive, which she could easily do, but goes on a mating flight after she’s just hatched, high into the sky and mates with drones. There are congregations of drones from different hives in sections of sky waiting for a queen to come. The queen keeps the sperm in her body from that flight and can live for five years or so in the dark of the hive until the bees swarm.

Next spring, virgin queens emerge. Just before the first one hatches, the queen takes about half the bees, and they swarm and move into a new hive—the birth of a new being. The following year, the same thing happens again. It is the mother who leaves and takes the risk. You leave everything behind; safety, food, your home. In natural conditions it can happen twice in a year. The swarm is the child.

You find on East European gravestones that the swarm is the symbol of the soul leaving the body. The soul has to incarnate and take nest in some kind of cavity. 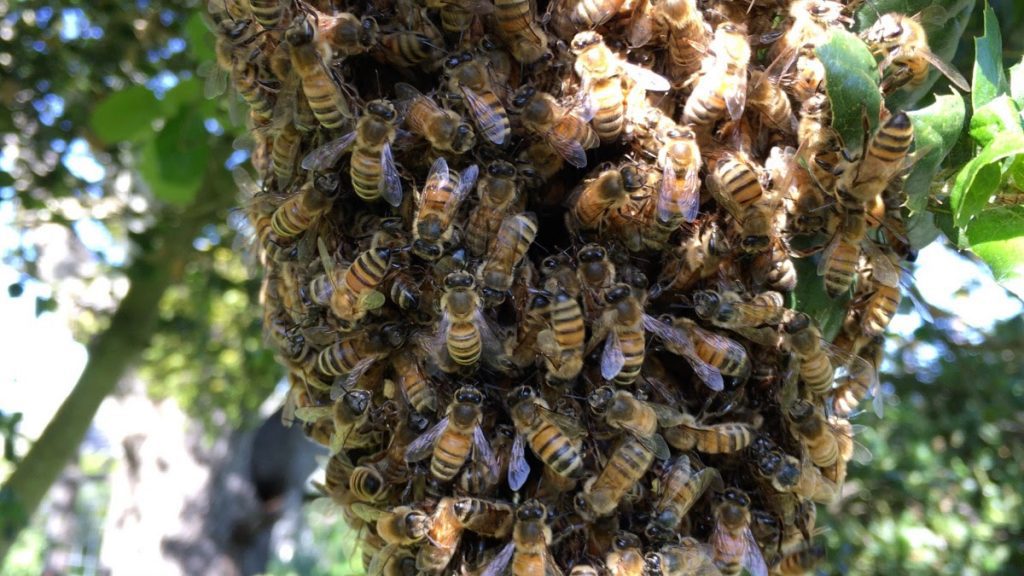 Bees are very enigmatic beings, an embodiment of paradox and oxymorons. In physics, light is both a particle and wave. Bees are just like that. For instance, we may think that bees are an insect and yet they are a mammalian organism. They are a warm-blooded being about the same temperature range as we human beings. A single bee is not the organism. It is the gathering in multitude that constitutes a loosely compounded being. All the bees are the equivalent of the somatic self of a singular being. It’s a superorganism, a holobiont, or a meta-organism. The hive is one being.

Human beings are composed of perhaps 50 percent human cells. In the word “I” we refer to something we don’t even know, namely, the other 50 percent non-human cells. That’s either very beautiful because we don’t differentiate any more, or it’s extremely oblivious that we are unconscious to that reality.

We have such a hard time to identify ourselves with paradox and contradiction. Rudolf Steiner called bees, “Ein Weltenrätsel,” “A world enigma.”

A Brief History of Bees

Throughout time the migration of honeybees originated in Africa, as did homosapiens. The Latin name, apis mellifera, is a misnomer as they don’t carry honey, they carry nectar. By calling them apis arborea, we are shifting the focus back to their nest site. Their downfall has been the emphasis on honey.

Two of the major migratory routes were across to Gibraltar and on to Central and Eastern Europe, and across the Near East and on to Asia. Their populations were stable for a very long time, and at some point in the 16th century honeybees were brought to the Americas. Now they are naturalized worldwide.

The first settlers kept bees in skep hives (baskets placed upside down) made from straw and grasses. Records from the 16th century show that log hives were in use in Europe, as well as skep hives. The symbol for the State of Utah has been a skep since 1847.

The modern day square hive, the Langstroth, was designed in the 1850’s at the beginning of the Industrial Revolution. It exposes bees to continuous stress positions and does not grant or honor their birthright. 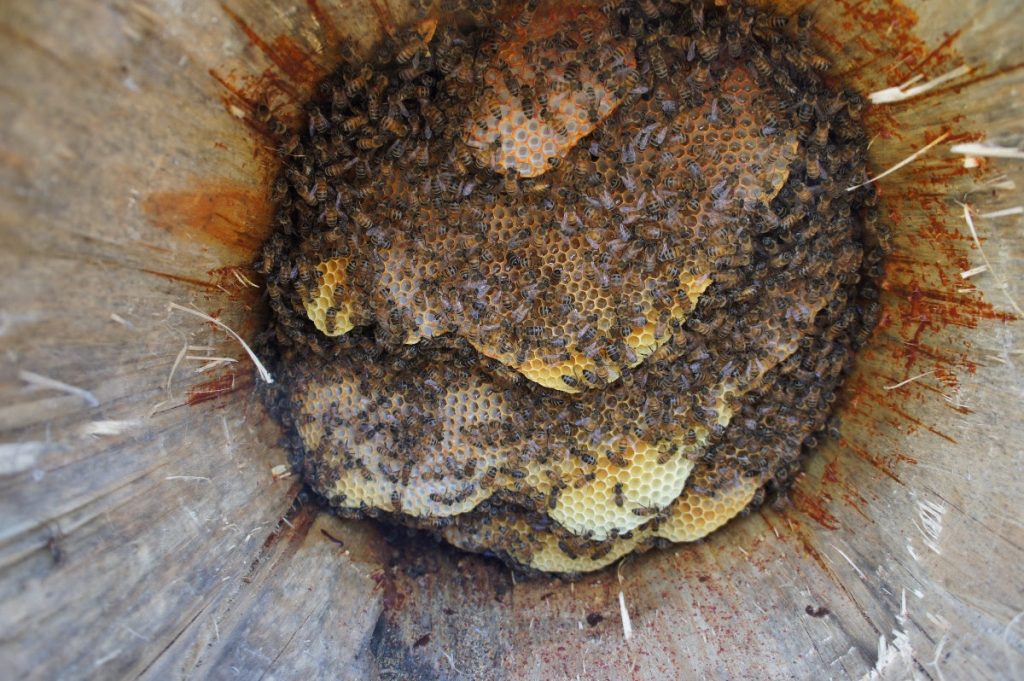 Overwintering bees in a horizontal log hive in early spring

When did your relationship to bees begin?

It started twenty years ago while I was at Tassajara (Zen Mountain Center) on a three-month retreat. I found I was dreaming about bees that winter and in the spring I borrowed an empty hive and put it behind my house at the Green Gulch Zen Center.

We lived in a tiny 400 square foot house. One day I was working on the farm and people were calling my name. A huge swarm was around my home. I cracked open the lid of the hive and they all flew in. It felt like the genie was flying back into the bottle. I was hooked. It felt so beautiful to live at the Zen Center and keep bees. They have such intimacy and congruence.

I started in the Langstroth system, but something didn’t feel right. I researched other hive styles. I found the sun hive in early 2000. I imported hives from Germany (where Michael was born and raised). We left the Zen Center in 2005. I had been there for eight years. I co-founded the Melissa Garden in 2007, one of the first honeybee sanctuaries in this country—a place of healing, a place of refuge. It was about restoring the health of honeybees—not about harvesting honey. We took bees completely outside the conventional bee-keeping paradigm. It closed to the public in 2012.

From the very beginning it felt like we had undermined the foundation of apiary health to such an extent that it was asking for a fundamental, radical shift in apiculture.

Here in the U.S., animal mortality rate is at 42 percent of all registered commercial hives. That’s over a million dead hives, each with a population of 30 thousand bees. The problems are approached like auto mechanics. There’s no sense of sentience, agency, enchantment. Conventional bee-keeping is about mechanics. Compare that to the relationship between bees and our ancestors. In Egypt bees were born of the tears of the God, Ra. They were at the foundation of the Tree of Life, Yggdrasil, in Norse mythology. They were seen by the Greeks as sacred beings, and the priests and priestesses at Delphi were called Melissae. The Old Middle German name for queen bee was, “Weisel,” “The one who knows the way.” From Descartes onward we became soul blind. I harvest health, not honey. Only when the hive dies will I gather their honey. 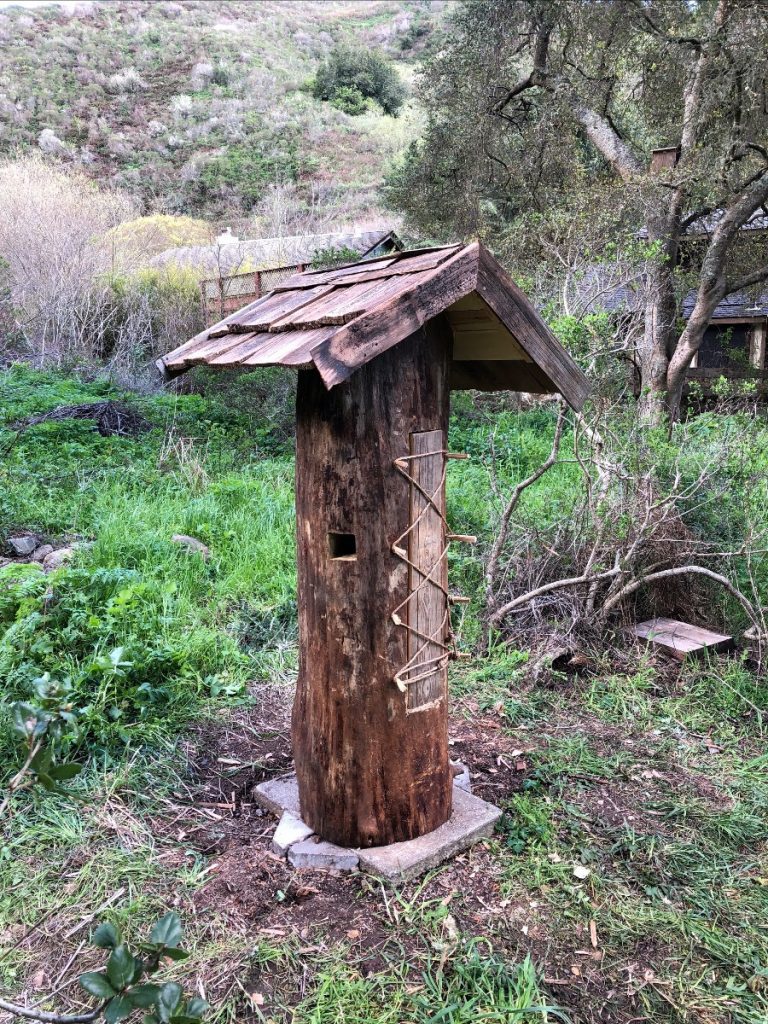 We’ve entered a renaissance of arboreal apiculture in Belarus, Poland, Russia, and all over Europe. We’re lagging here. Michael shows me a hive of European design that goes back thousands of years, a Zeidler hive, that stands about six feet tall. He then leads me to a Bee Sphere hive that was made in Germany.

The atmosphere in a tree hive is filled with hormones, pheromones, propolis, humidity, like the gut or lungs. It’s so under-researched. The moment you open it up, it’s all destroyed.

Because bees and their world are so outside of our experience, we project onto them our mono-dimensional language, for example, “worker bee.” It’s the language of reductionism but it’s not the language of honeybees.

You can dive deeper into these mysteries with Michael Thiele on YouTube: The Language of Bees and Healing the Earth with Bees. Michael also offers workshops and courses, including interactive international live-stream on his site.

So, I cover myself with busyness, anything
to paper over the cracks of pain, the call
from the hive. My sweetness lies
in joking asides and fishing for companions
whose fear-hidden eyes won’t look
past the smoke screen masking our view
through the window panes.

Yellow jackets fiercely contest my half-baked
reflections. Now and then, I catch a rupture
in my laughter, a fish bone momentarily snagged
in a gullet. Through the tides of exhausted nights
my mind and body churn. In their wake
of white-capped hopes, only the gulls give voice
shrieking and plunging.

The days and months pitch and plummet
in the wind. My bones, grown hollow,
drip with the fat of half-digested events.
My smile bares itself. My sunken eyes suffer
the nobility of age behind manicured looks
and hunger unabated.

In my sleep, the sound of swarming wakes.
The bees have built an earthen mound
whose insides are thickly crusted with honey.
How I long for their sweet song!
With my bare hands I tear at its walls
to touch that clotted substance,
to smear it over my mouth and tongue,
hair, chest, legs, and arms.