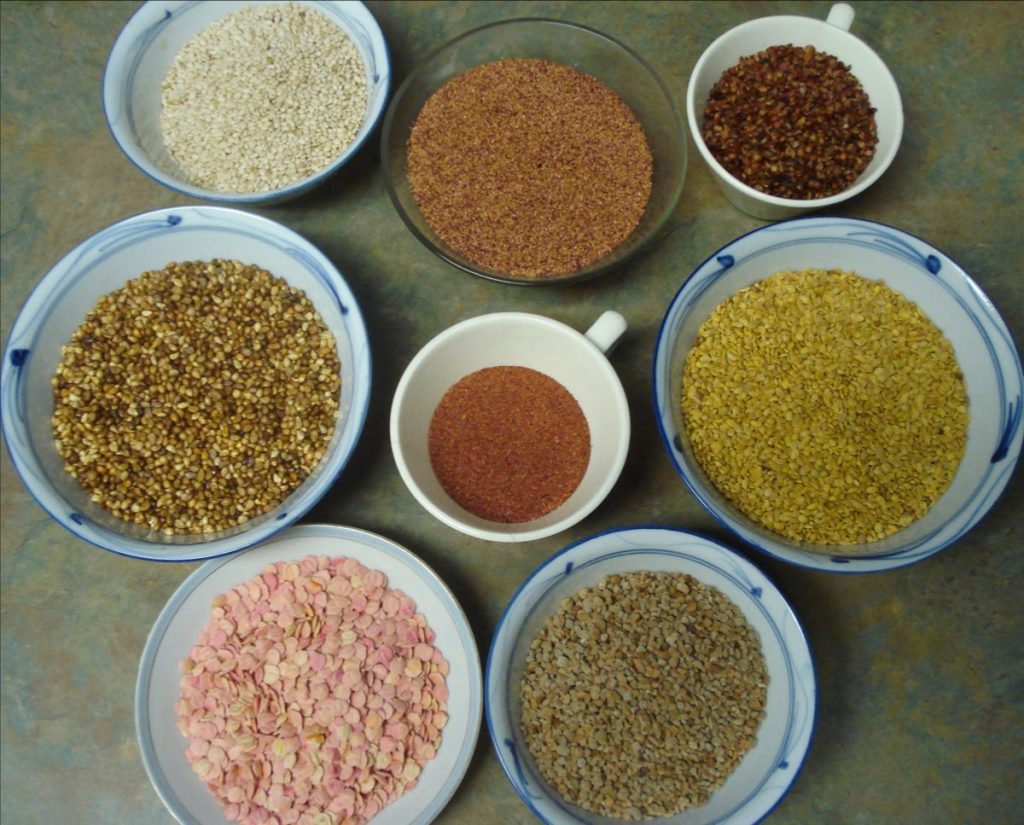 Cleaned seed of the eight native species of berries. Photo by Forest Shomer

Forest Shomer1,2 has been collecting and growing seeds for over forty years. His names came to him over time. “Shomer” has many meanings in Hebrew. They include: keep, guard, watch, observe, heed, or preserve. The name Forest connects with most closely is that of a prayerful attitude to the guardianship of seeds and plants. His current emphasis is on native seeds. When we met he spoke about his experiences.

I go to the places where native seeds are already growing. They are almost all perennial. So I walk the trails to new places to find the plant communities where they live.

Botanical gardens, for example, Japanese Zen Gardens, are recreated from observation to be as close to nature as possible although still manmade. Trees are primarily native and wild, if they haven’t been planted by people. Their understory is more generally managed by gardeners.

I was fortunate to meet Lucie Hupp, a master gardener and garden columnist, in the late 60’s when we created The People’s Garden in Berkeley. She had a lot going on in her acre, preparing foods and drying herbs. Plants were all woven amongst each other. This is also true of words and language.

For the first half of my life I grew up in a city, Chicago. The City’s motto was “Urbs in horto” meaning, City in a Garden. What made the City special were the great landscape designers, Daniel Burnham, and the Olmsted Brothers, who came after 1900 and the City fire. They created large neighborhood parks, connected by boulevards. The boulevards curved, which is so important for the landscape. You don’t find grids in nature. I walked and walked the City looking for new plants.

I now live in a small town, Port Townsend, Washington, on the Olympic Peninsula. I moved there when I became a parent. There’s a large state park close by, Fort Worden. It was a military base and now is used for retreats and educational facilities. There are hundreds of acres including beach and shoreline.

As a botanist I often make lists of species in particular locations and trails. It’s usually an eye-opener. On my urban 1990 lot of 10,000 square feet there were some mature evergreen trees, some garden plants people had placed there, and weeds. Making a list, I found 70 species growing on that lot! Even urban dwellers may find a lot of diversity.

Just as at Findhorn one area was always left uncultivated, I leave the most wooded part and understory of shrubs two to twelve feet high. When I find invasive plants, I remove them. 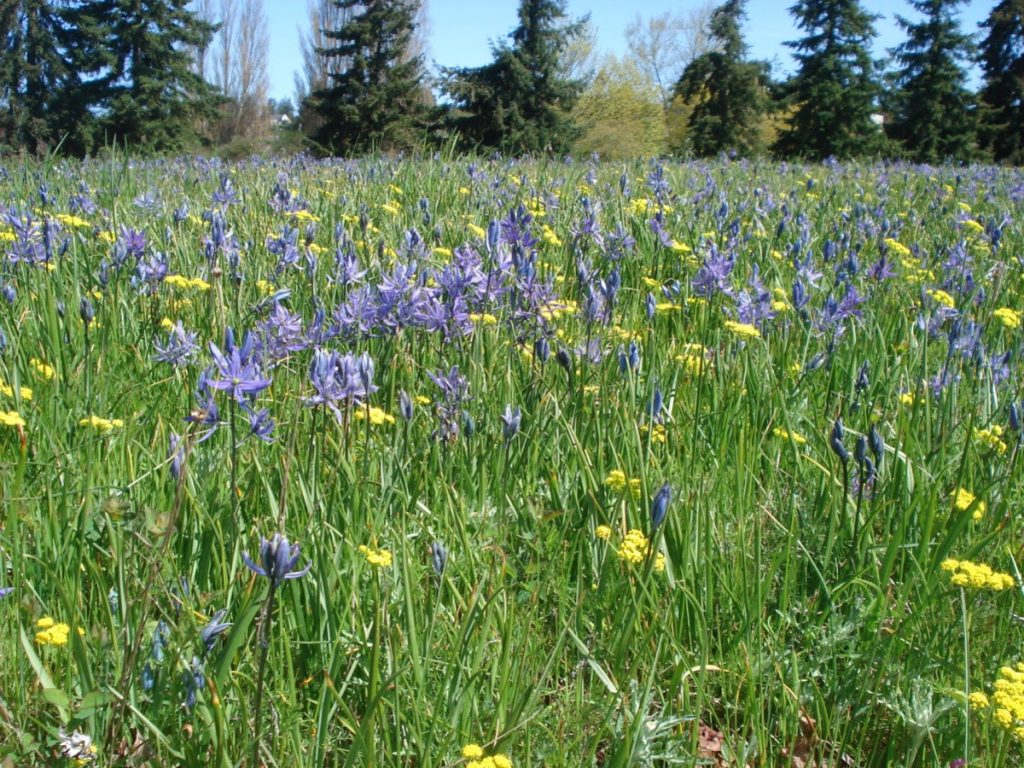 Native prairie in bloom, 2018. I have been the principal steward of this prairie for around 30 years. Photo by Forest Shomer

About two years ago I moved close by to an even more natural lot. It’s by several streets with a right of way, but they have never been built. There are trees over 100 years old there. It’s fairly wooded, and I don’t feel restrained by property lines, as I’m not the landlord. So I work in the corridors.

A generation or two ago people took care of community areas. But no longer. They expect the city to and it doesn’t. So I look at the invasive species in the woods. English ivy, for instance, rises up the trees and can completely engulf them. It changes the ecology of species, for example, what grows on the bark. Ivy becomes a wind catcher when it gets higher up the branches. I have two grandsons, and the 14-year-old helps me. Ivy harms cedar and fir, too. As a member of the Native Plant Society we do organize work parties, but mostly I take the initiative when I come across invasive species.

In Fort Worden, the ecology had been disturbed by army activity over many years. Once they left, a group was formed, “Earth Stewards” in 1993 and two groups started remediation with the cooperation of the park rangers. One group pulled all the invasive weeds and scotch broom trees with park machinery. The other group gathered seed from natives in July, and planted in the fall. It’s now one of the premier natural beaches with great wildflowers extending for miles to the lighthouse at the entrance to Puget Sound. When the State installed optic fiber cables along the length of the beach, they dug a trench. While it was being refilled we scattered seed over the soil. This remediation or Repair of the Earth, is called “Tikkun Olam” in the Jewish mystical tradition.

For over 20 years I raised vegetable and herb seeds, but in order to repair the Earth one has to use woody and perennial seeds that don’t require humans to steward them. I help landscapes recover their nativeness. There are examples of active military bases engaged in ecological remediation.

We long for that original native (Eden.) We can be instruments for that restoration. We can bring the elements together that reflect that harmony and original unity. Why? Because it feeds and nourishes the soul. We need examples where everything is working harmoniously.

1. Meet Forest, the Master Wild Seed Man!
This one minute video introduces the breadth of Forest’s work.
2. Forest Shomer on Seeds – a full and fascinating interview.

I’d like to share two extracts from the book, SACRED SEED3, compiled and edited by the Global Peace Initiative of Women, with a forward by Vandana Shiva. It has over 30 contributors from a variety of indigenous traditions, world religions, and spiritual paths.

THE SEED OF COMPASSION
His Holiness the 17thGyalwang Karmapa, Ogyen Trinley Dorje
It seems to me that the Earth is the very embodiment of Bodhicitta (the seed of Bodhicitta—the potential for an awakened mind that resides in all sentient beings). She unconditionally provides the grounds of life and no matter who we are or what we have done, we equally receive compassion from her. It is quite amazing when one thinks about it—that there is oxygen that we can breathe, that there is water which we can drink, and that there is soil in which plants can grow to feed us. Aren’t these miracles that we should feel some awe towards? Instead, we are very busy trying to claim the Earth’s bounty for ourselves and deprive others in the act. We behave in the exact opposite to her! And, we are very shocked when there are consequences to our collective actions such as natural disasters, climate change, and wars. Because we spend so little time nurturing the Bodhicitta seed, we even lack the ability to acknowledge that our actions have brought these troubles to the world…

It is very important that we emulate the Earth’s attitude of generosity towards us. Just as we would do when receiving a precious gift from someone we love, we need to nurture what we have been given. This includes the Earth’s many wonders and biodiversity, as well as our own relationship with all sentient beings. It also includes our own minds and our own Bodhicitta seed. We should nurture this precious seed of compassion and give it all the light and nourishment it needs to grow. If we are able to do this, we will no longer be a burden upon the Earth, but a source of relief.

At the core of the world is the power of the sacred. It holds all things together in life, and gives each species a sense of identity and purpose. Without the sacred there is no meaning in life. All our relationships reside within this sacred bond. It is the root of our well-being and that which seeds the soul…

Because of the nature of our constitution, we have been gifted with a diversity of seeds and nutrients to ensure our survival. These gifts are not about reinforcing our human propensity to dominate; rather they are about how we can learn to be a steward within the sacred contract. It is only when we humble ourselves enough to bow to this sacred contract that our survival is assured.

A friend from Australia responded to January’s Newsletter, The Beauty and Healing of Trees.

I have been willing to send you something for ages, but words don’t come too easily for me!

Sometimes, wishful thinking or not, I have the feelings that the angels are around, there is a certain kind of magic in the air! But mostly, I am feeling a shift, a kind of opening in the heart. It has to do with trees…  I am starting to get a sort of kindred feeling with trees, specially the tall gum trees, like the one close to our house.  Driving back from the beach, this afternoon, I was feeling that feeling that trees give me… the atmosphere was dull, a sort of haze was veiling the sun. And then, from the top of the bridge, I saw the trees in the park. Their leaves were all shining… the contrast was striking!.. It was altogether magic, and also, I could have dismissed it… like a choice of perception!  I chose the magic, and I was filled with gratitude!I took a picture of the tree at the back of our place… It is so big, it is hard to get it to fit in the camera!! 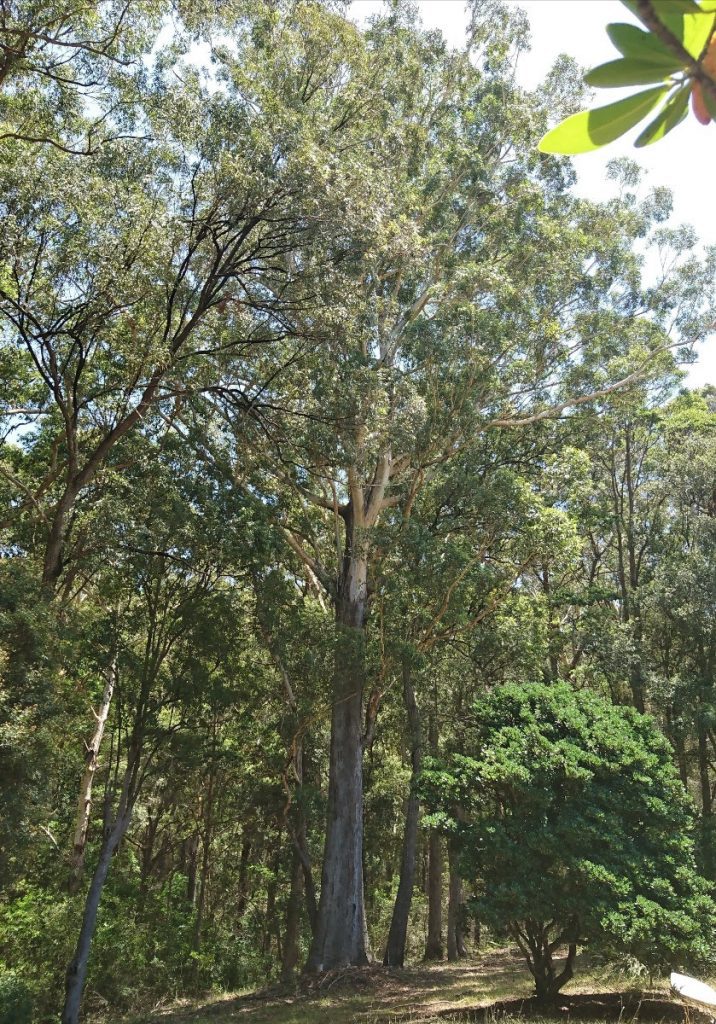 Please share your experiences of loving our Earth so we may all grow!
Send to raphaelblock@raphaelblock.com

how far
will this busyness take me
dandelion seeds
Haiku from Renée Owen’s collection, Alone on a Wild Coast.
Stay in Touch