↓ Skip to Main Content
Home › May 2020 | You can’t care about species unless you have an emotional connection; without that you can’t empathize and understand them. Interview with Sarah Allen, Marine Biologist and Conservationist – Part I

May 2020 | You can’t care about species unless you have an emotional connection; without that you can’t empathize and understand them. Interview with Sarah Allen, Marine Biologist and Conservationist – Part I

I met Sarah Allen at a picnic in February by Point Reyes Headlands. A few yards away, baby elephant seals, shaped like miniature zeppelin balloons, slept peacefully. They’re weaned at 30 days and can then begin to swim in the shallows out of reach of white sharks, Sarah said. A male elephant seal and a cow with her baby were sprawled out on the beach close by. The baby squawked the most. One or two gulls and a raven came near to their bodies searching for pickings. Sarah explained, Elephant seals are very curious and not fearful of people, because they evolved on uninhabited islands. We met soon after so I could learn more of her fascinating story.

Sarah Allen was born and raised in Marin, which borders San Francisco Bay and the Pacific Ocean. Sarah has had a lifelong passion about being close to marine wildlife and marine systems.

I was strongly bonded to the landscape as a child. At 8 or 9, I would take my mother’s binoculars and look at harbor seals and count them. 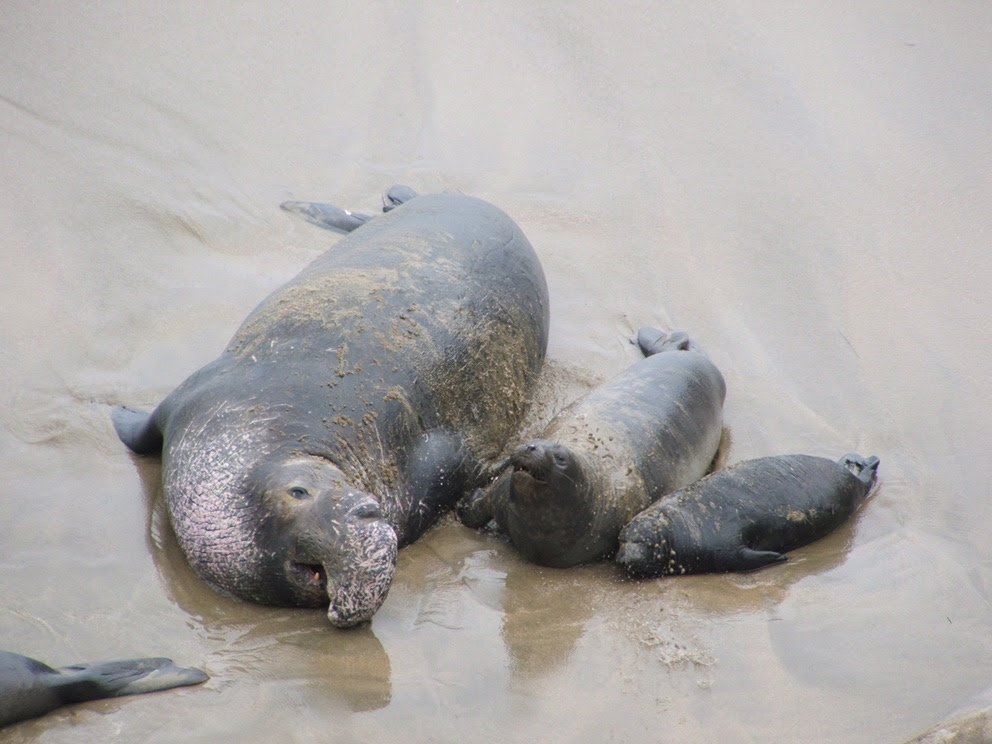 I went to the University of Colorado as an undergrad. I studied biology and pre-med for two years before I transferred to UC Davis. After a year there I dropped out. I wasn’t sure of my direction. I missed being by the ocean.

Back in Marin, I volunteered at the Boyd Museum, San Rafael, which later became Wild Care. I was 20. It was there that I met my first elephant seal. We raised it and fattened it up for a couple of months before it was released at Año Nuevo State Park. I held the job of Co-Curator of Wildlife at Boyd for two years.

There was another large oil spill at the time, after the Golden Gate Chevron spill in 1970. We treated sea birds, like common murres, feeding, hydrating and doing the initial oil cleaning. We then sent them to the International Bird Rescue Center in Berkeley who had developed a protocol for cleaning from the 1970 spill.

I was interested in wildlife conservation, so I went to UC Berkeley. My mentor there was Starker Leopold, Aldo Leopold’s son who, like his famous father, was a pioneering wildlife biologist and conservationist. Starker really inspired me, especially about the need for protected areas. He was one of the first commissioners for the Marine Mammal Commission created by Federal law in 1972. Through Starker I met Bob Risborough, who was funded to study harbor seals contaminated with pollutants in San Francisco Bay. He needed a comparison with seals along the coast. I collected dead seals and helped necropsy them (an animal autopsy). I had been trained by the Curator of the Museum of Vertebrate Zoology how to necropsy, and I also had training on humans in my first two years of pre-med. 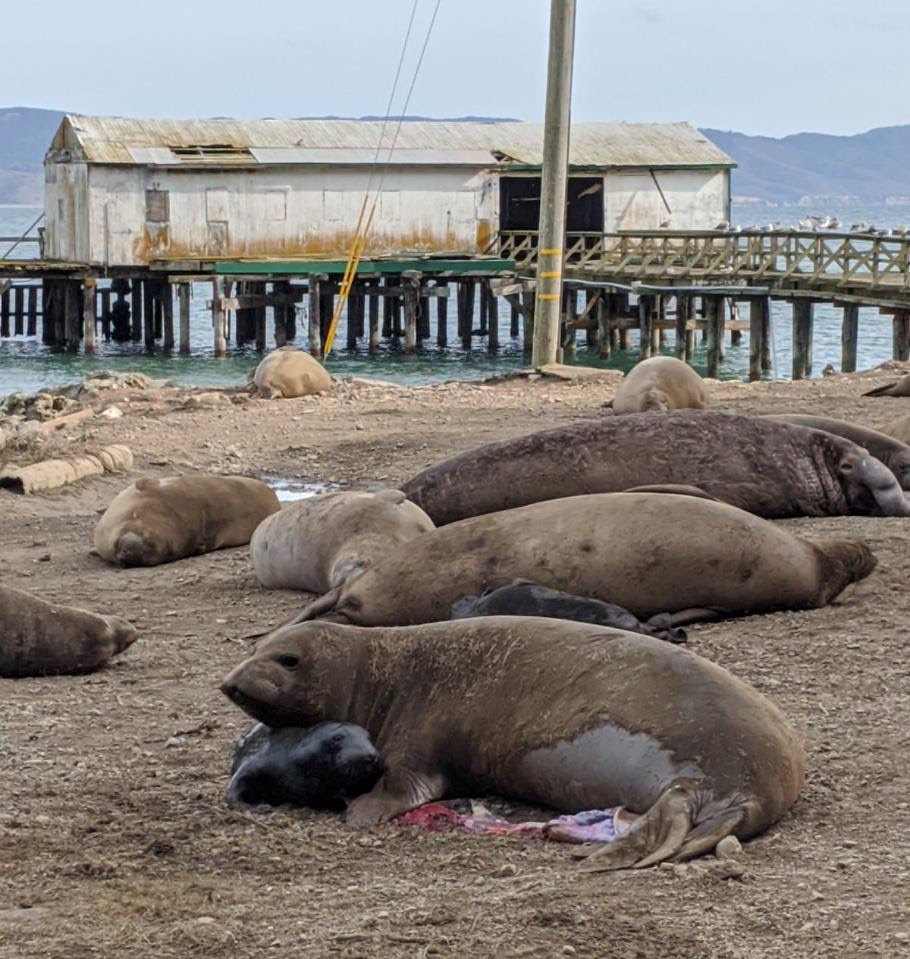 I got hooked on harbor seals in Point Reyes, Bolinas, and Stinson! At Double Point, just north of Bolinas, I counted seals for a population study and looked for dead ones.

The Point Reyes Bird Observatory (PRBO) had an office at the trailhead where I would hike out. I’d stop there on my hikes and they got to know me. Someone suggested I go to the Farallones (the Farallon Islands National Wildlife Refuge) to study elephant seals. I went there as a volunteer for a season and was then hired to help as a field biologist. My mother loved birds, so I also got to know birds as a child.

I started working for PRBO around 1977. The County of Marin funded me to study harbor seals in Bolinas Lagoon. My mentor was David Ainley, who was on the Marine Mammal Advisory Committee. There was interest in Bolinas because it was becoming incorporated in the Golden Gate National Recreation Area. In two years of intense study I pioneered using cameras to photograph seals every minute, and then look at their use of the lagoon daily for a couple of years. I documented their seasonal presence. I placed cameras on Seadrift and Highway 1 and published a paper.

I was then funded for a three-year study that included placing radio tags on the seals. The Gulf of the Farallones (now called the Greater Farallones) National Marine Sanctuary used the data. Another mentor said that I should turn the study into a Master’s. So, I came back to UC Berkeley.

During the pupping season, you see the interactions of harbor seals and also their disturbance by human activities. Harbor seals mostly sleep during the day. They can lose their pups or go somewhere else when disturbed.

Double Point was one if the largest pupping colonies in California and was being disturbed a lot during the pupping season. I’d talk to the Park about the Marine Mammal Protection Act, and eventually the Park put up signs to protect the seals. I looked at seals through a conservation lens. In the late 80’s I was still at PRBO. I also worked for them as a librarian, an admin assistant, and running a program on beach bird monitoring, coordinating volunteers.

In the late 70’s, graduate students at UC Berkeley told me that women weren’t encouraged to go back to graduate school and wouldn’t be accepted. I questioned the professor in charge of admissions at the College of Natural Resources at the time I applied. He actually said to me that the principles of wildlife management did not apply to marine animals!

PRBO was very accepting. About half of the staff were women. I finally went back to UC Berkeley in the 80’s and the Professor who accepted me said, “We’re a different Berkeley now.”

I remember I reached a ceiling. I needed statistics and other disciplines to fill out my gaps as an undergrad and I had enough experience to know what I needed. I finished my project and Master’s. I gained confidence enough to get a Ph.D. and did a totally different study: the distribution and abundance of marine birds and mammals in the Gulf of the Farallones, funded by various sources.

During the oil spill of ’84 there had been an explosion on a Puerto Rican Tanker Vessel in the mouth of Golden Gate Bay. I was involved in the rescue work and documenting injury to marine birds and mammals. 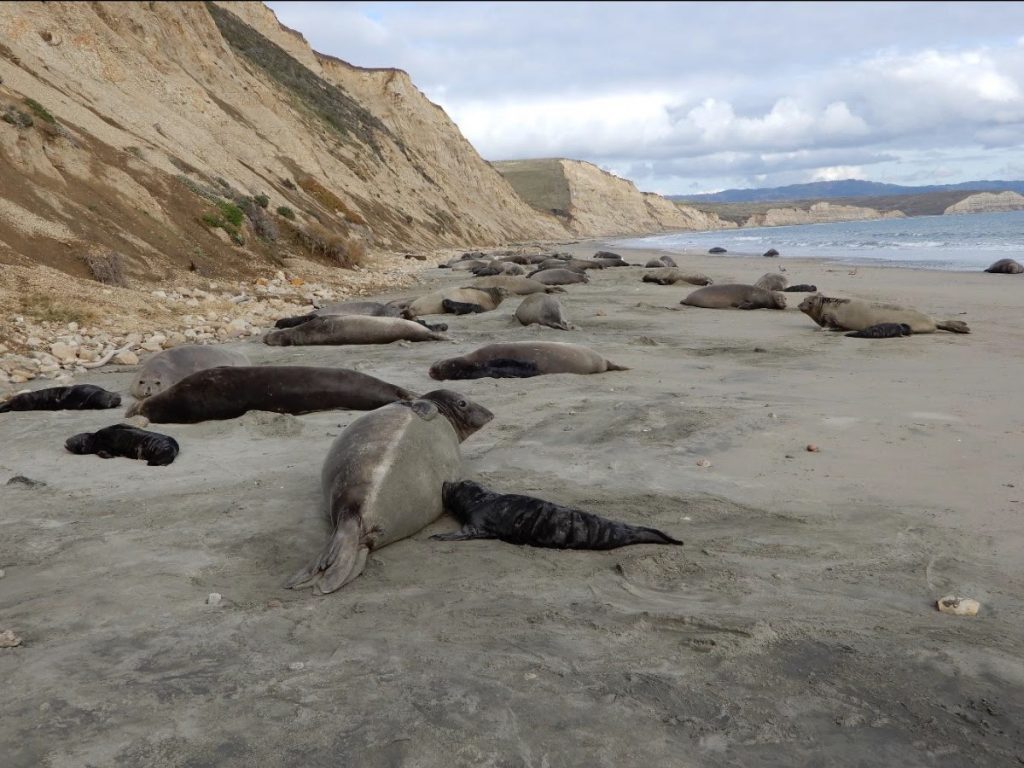 As a girl, I used to love catching lizards and snakes. I’d go up on Water District land close to my home and hike around. My mom was teaching High School and my dad travelled a lot. I lived at the top of a hill and didn’t have easy access to friends.

I was the youngest. My siblings were much older. It was like being an only child. I loved biology and had a microscope when I was 9 or 10. Fascinated by Nature, it was all magical to me.

I had no women mentors because they weren’t in the field! I’ve been a mentor to many of this next generation.

While I was getting my Ph.D. I realized I couldn’t go back to PRBO (I just couldn’t support myself financially at a non-profit) so I applied to whatever was available.

When I was studying harbor seals, elephant seals began showing up in a harbor seal colony. This was 1980. They had been hunted out for their blubber during the 19th century almost to extinction. A small colony survived on Guadalupe Island, off Mexico, and the species recovered. They eventually established a new colony in the Farallones.

I kept monitoring harbor seals and elephant seals from the late 70’s. It always made me feel good to be there, no matter what was going on in my family and life. It was a beautiful meditation place being out there by myself or with one other person. It was important to my emotional development. You can’t care about species unless you have an emotional connection, because without that you can’t empathize and understand them.

There are three wonderful and informative videos on the Point Reyes National Seashore Homepage about seals. Sarah Allen plays a part in all three. They are: Protection and Conservation of Elephant Seals; Elephants, Seals, and Lions, Oh My!; and Elephant Seals: Our Window to the Ocean. You can find them at this link. (https://www.nps.gov/pore/learn/nature/elephant_seals.htm)


And then above, a squadron of some thirty long-beaks swoops speeding over the waves in a fluttering V before banking inland along the rich estero. In their wake the coastline takes me to two stationary figures watching a wave of tan, rounded forms, just a little darker than the sand, huddled on the spit. Most lie still as logs. Occasionally, a body undulates towards the water, rounded rear in the air. Others change positions among their close-knit clan. A few heads bob at sea. Periodically, on raised periscopic necks, three pairs of eyes swivel towards us. Quizzical? curious? checking for danger? those soft orbs from the mysterious depths. Walking back along the shore, washed up wood resembles seals, and from bleached trunks liquid irises peer at the odds and ends of my humanity. 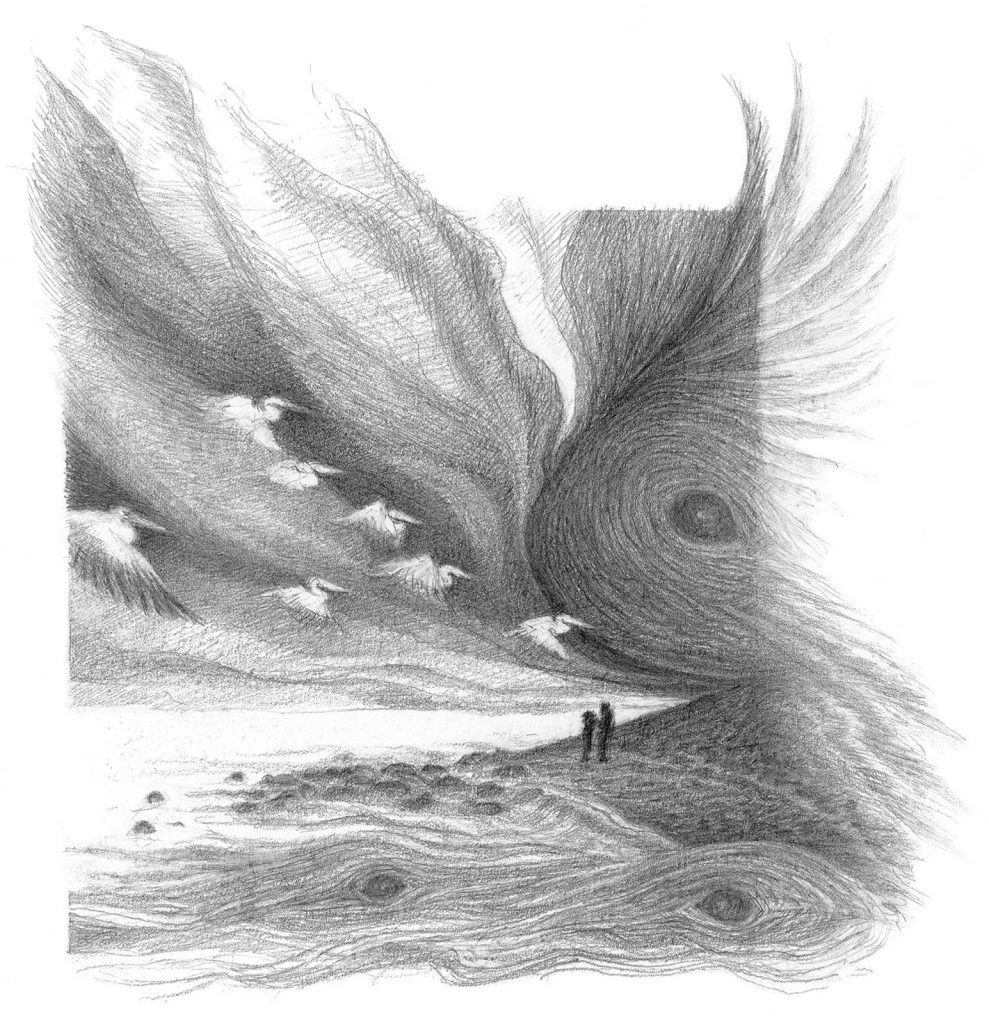 The pencil drawing, Between the Two Shores, by Clare Allen, was first drawn for this poem, Concealed.
Copyright clare.allen@zen.co.uk