My paintings and drawings reflect my love of nature. With a close observation of bark, moss, and the sun reflecting magically on the Laguna, my paintbrush, palette knife, and pencil go into an energetic frenzy! 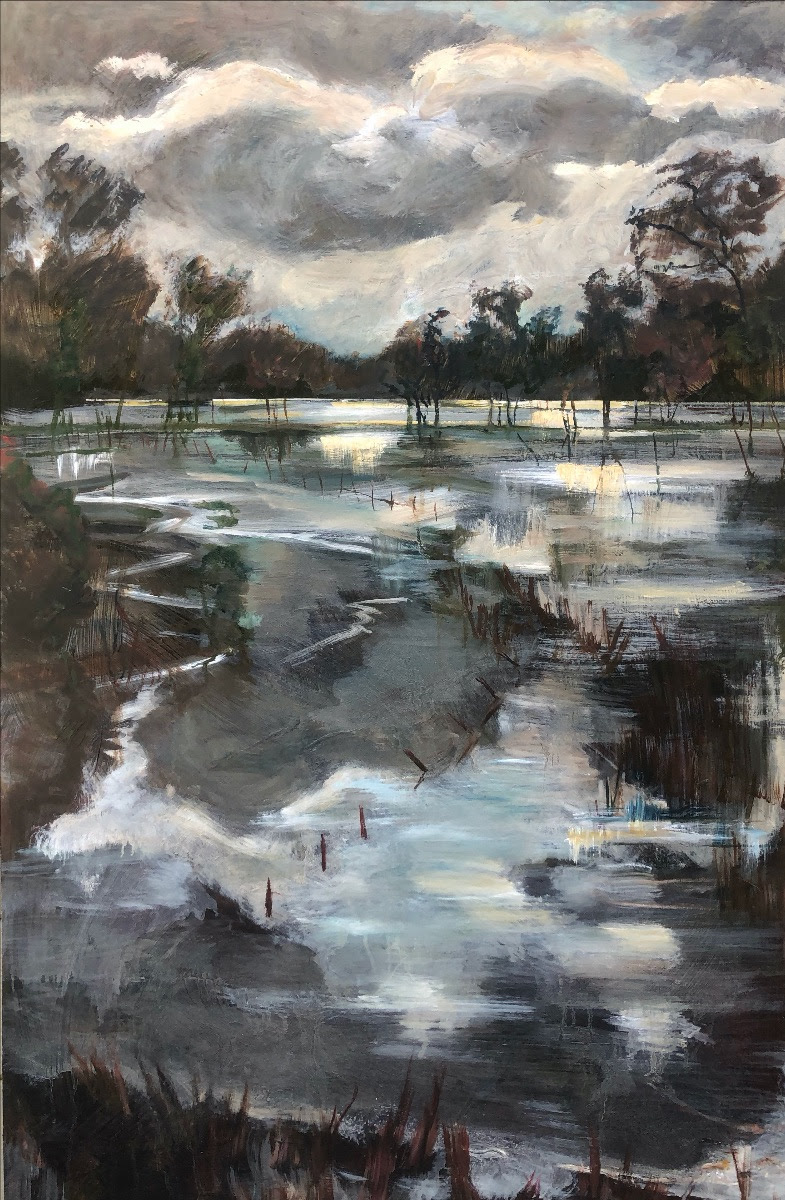 Shimmers      All the works portrayed are by Sally Briggs

We met at Sally’s home, on the patio. But first, Sally showed me her paintings mounted on the walls of her home. I remember a striking canvas of garlic in the kitchen. Her photographs, including a few by her father, ran up the stairs and spilled into other rooms.

My mother was one of theater and kitchen expertise; my father was an artist, professional photographer, and teacher at the Rochester Institute of Technology.

My mother had polio around the time I was born, and I was born blind in my right eye—I had some peripheral vision but no frontal.  The doctors said it might be a “lazy eye,” and at two years old, they put a patch on the “good eye” to see if they could strengthen the “bad eye.” It didn’t work. They also trained my right eye to only look forward.

I went to Quaker school—I still am a Quaker in my heart. In third grade (aged eight), I’d rip my patch off. I was sent out of class to a small group with a reading specialist. I was labeled “different.”

In fifth grade, a math teacher exclaimed, “I can’t believe it! You can see math and figure it out.” So, they took me out of reading class and placed me in art classes twice daily. The art teacher was astounded by how free I was on the paper. This was in sixth grade, and I began to blossom as a student. Everything became easy as I was declared an “artist.” 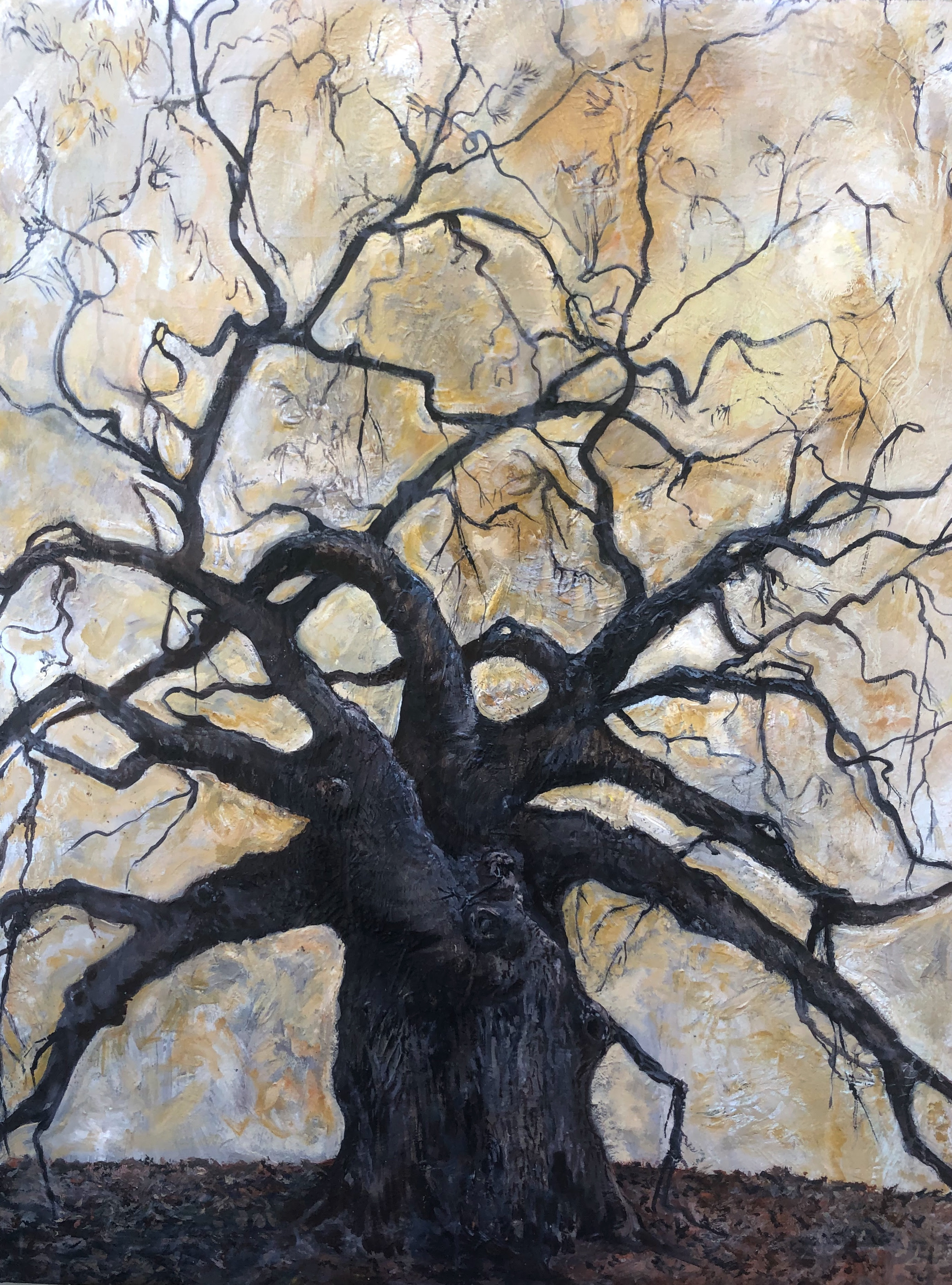 During high school, either typing, language, or theater was a requirement to go on to a 4-year college.  “Let’s try her out in theatre.” I was “discovered” and given all the lead roles. Once again, I became a special person instead of one assigned to reading or typing classes.

At 17, I was accepted into the prestigious Rhode Island School of Design (RISD) with half my tuition paid. My father wasn’t earning much by then. As the youngest of three siblings, the other two had long left home, I witnessed my father’s over-drinking and abusive behavior towards my mother. He once said, “There were reasons why I abused your mother.” There can never be justification of such behavior! He became manic-depressive. I carried him too many times. I’ve stopped that now.

My four years at RISD coincided with the Vietnam war. In 1969-70 year, half the staff did not want to teach and many of the students fled to Canada. I was given permission to go to West Town, Philadelphia, and teach swimming, art, and theater at a Quaker school. It was a wasted year at RISD.

During my four years at RISD, I was accepted as an actor at Brown University for extra credits, and eventually an actress for a Children’s theater. Being the only one to keep pitch, I was sent to join a Providence Island chorus. I met my husband there, Scott, who was singing with a Brown University chorus. He’s a scientist, and I was happy to get to know intelligent Brown scientists and musicians. 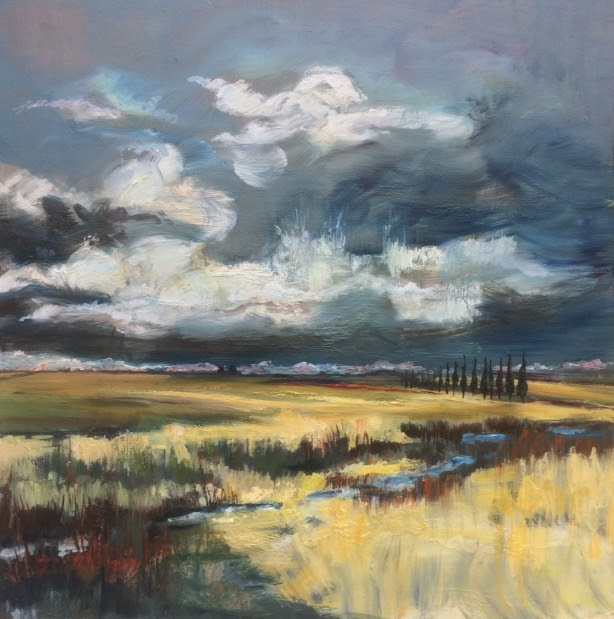 During college, I continued to chef on weekends. Scott had to become my bartender. Once he graduated, we moved to Woods Hole Oceanography Institute (WHOI) in Massachusetts. There I cooked and taught art. I became so enthralled with teaching kids in elementary school. (I’ve taught kindergarten through college.)

We next moved to southern California and I had to start all over. Then we moved to northern California and I had to hang my shingle out again. I got wineries as clients and I started teaching. There wasn’t much art in schools back in 1988. So we managed to get hold of an old school bus, and gutted it with the help of the fire and police departments. We converted it into an art studio for 20 kids, and for five or six years, I taught at Armstrong Woods, Doran Beach, and at a llama farm.

I taught kids how to see what their surroundings were and how to create with that vision. That’s how I became much more of a landscape artist. I was accepted into a male group, the Sonoma Four, for a short time. Bill Wheeler, one of the Four, accepted me and I did a lot of plein air. 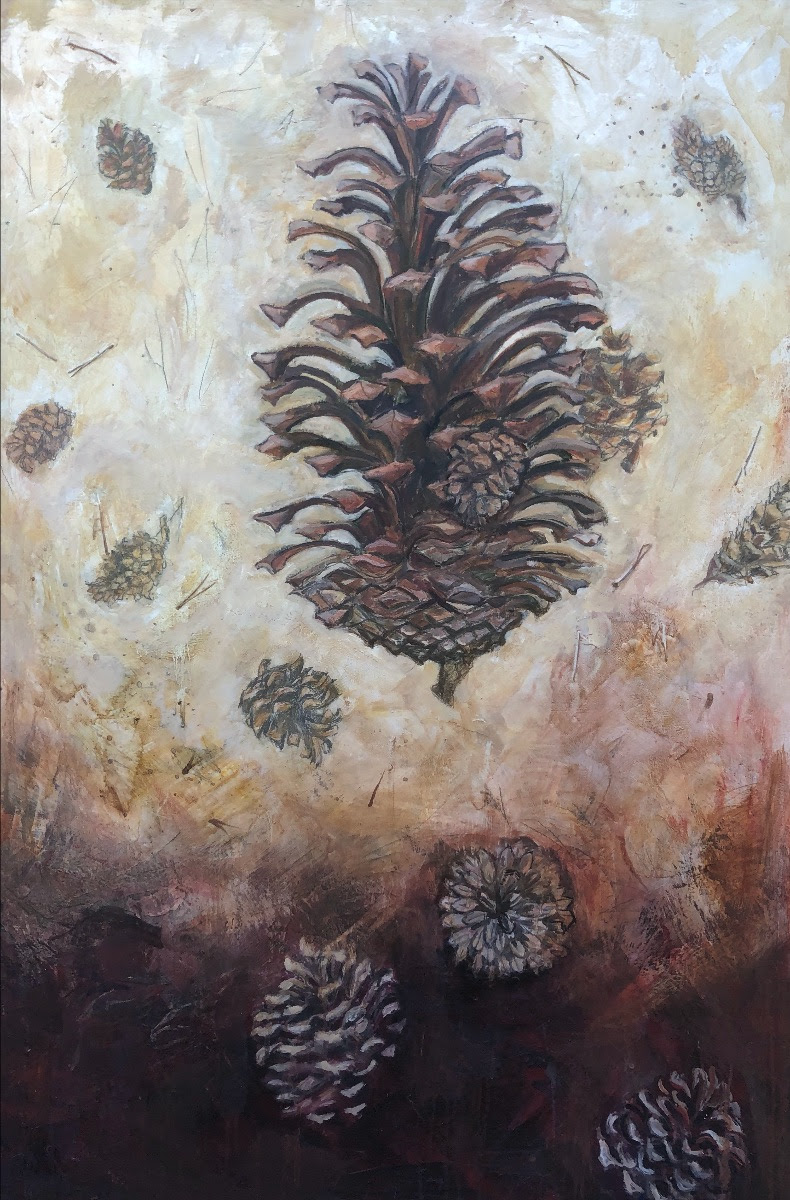 I had to earn a living to cover our health insurance, so I got a high school job teaching art and photography, first at Casa Grande, Petaluma, and then at Analy High School, Sebastopol.Photography (film) is my second love in Visual Arts. Looking through the camera (analog, silver gelatin,) you have 36 or 24 exposures, and every exposure counts. I was teaching kids how to “frame” a picture. “It’s your decision what that picture is!” It made me make more acute decisions on my landscape paintings. I think it’s still important that the paint is paint, drips and all.

I’ve had cancer for two years, but it took eleven months before I was fully tested and diagnosed with stage four cancer. I’ve taught for 48 years and I’ve received Teacher of the Year awards twice. It was cancer that made me stop. Teaching is learning. I love it when a kid comes up with an idea such as holding a brush in a different way. I say, “Can I borrow that?” It was very tough giving that up. 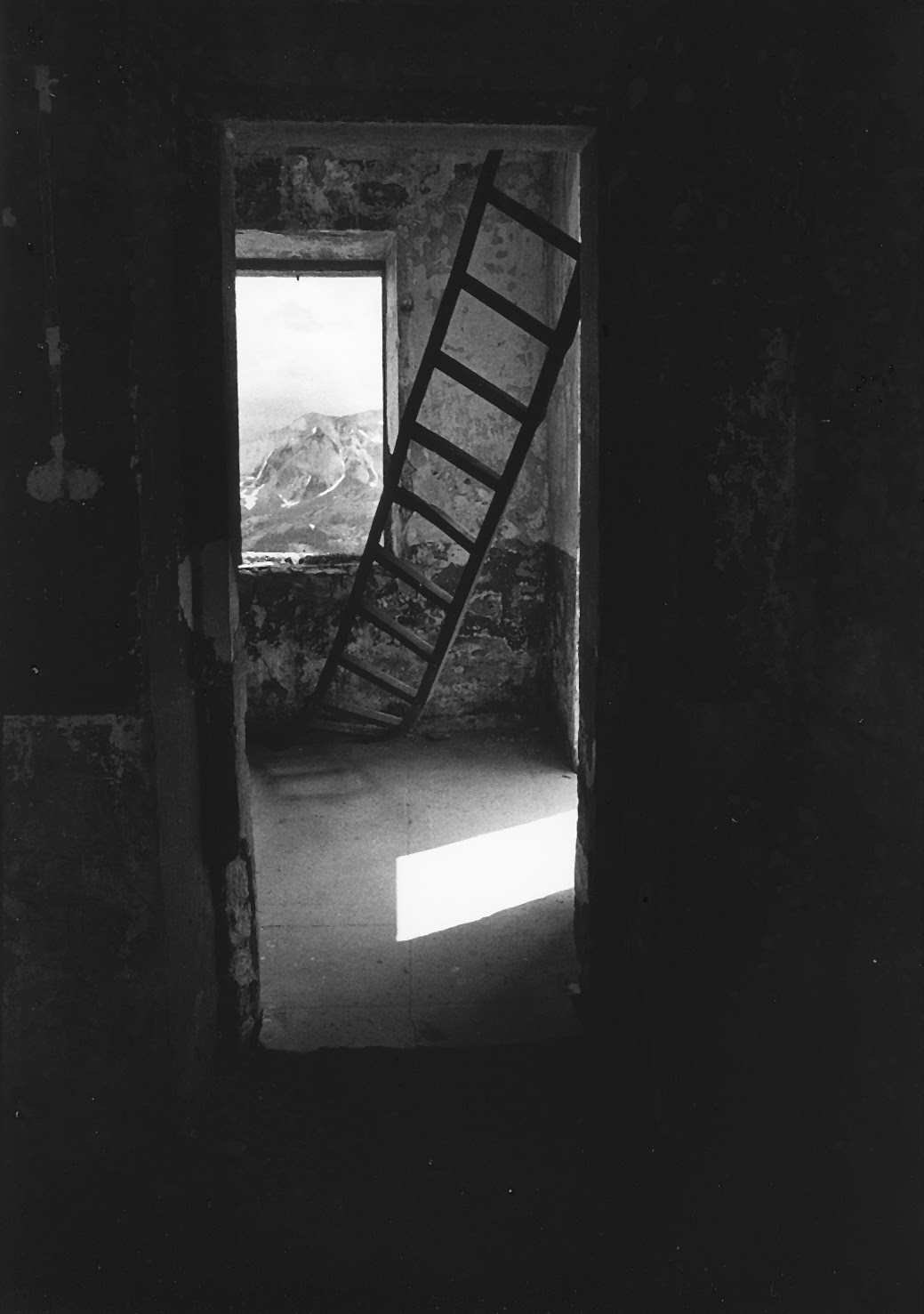 My life is different now. I have a few adults to whom I teach drawing. I have 2 children and 4 grandchildren. My cancer-filled life has brought me grief and days of isolation. But there is a “silver lining”. I have become much more aware and observant while I take my daily walks. Last week, during a wonderful day at the beach with my grandchildren, my oldest grandson called out, “Grammy, I need feathers to make a fence around my castle.” Being on the autism spectrum, he decided not to use the cups and pails like everyone else. My chore was an easy one. I gathered gull feathers, heron feathers, and fun mystical seaweed creatures. During this search, I followed a trail of newly strewn feathers from a stack of dead gulls twisted in fishing line… their corpses opened to the sky. I gave each one a proper burial using a stick, and then adorned the graves with a feather. I then returned to the castle in need of feathers.

The next day upon leaving a drug store, I noticed fossil-like prints on the cement path…surrounded by other leaves of orange and red floating in a gentle breeze. The fossil-like print even showed the vein structure of the owner. These two days show a sampling of my love for nature, and my will to be observant and take the time to see.

Sally talked to me about her paintings in her current exhibit at The Laguna Foundation, 900 Sandford Road, Santa Rosa A few are viewable on her site.

I did a quick drawing from a photo of the Laguna. Then I painted it fast and very loose. I was on chemo. I was feeling down and thinking, “How am I going to get through this year on chemo?” The answer came to me with the title. The bark was important, almost like my veins.

The pine cone. I was running three miles in Nice, France, fell and badly broke my wrist. I was operated on and they inserted a metal plate in my wrist. I was supposed to meet friends in Greece soon after this accident. I was able to go but still couldn’t use my hand much. I went to physical therapy, and they asked me how quickly did I want to regain use of my hand? I answered, as soon as possible. They dipped my arm in hot wax and then wrapped (?) it before they started yanking on my hand and arm. I got full facility in one month. While I was being treated, I painted every day a little with my broken wrist. See the red at the bottom of the painting. That’s the pain I felt.

‘Oak on the Laguna’

The bark is my veins. There was a small swarm of bees in our apple tree. A beekeeper wanted to catch the swarm for a beehive. She put the box under the tree. The swarm had grown and filled the air. She fumed them with smoke and tapped the limb many had settled on, and they went straight into the box. I dipped the entire painting in beeswax to honor them. 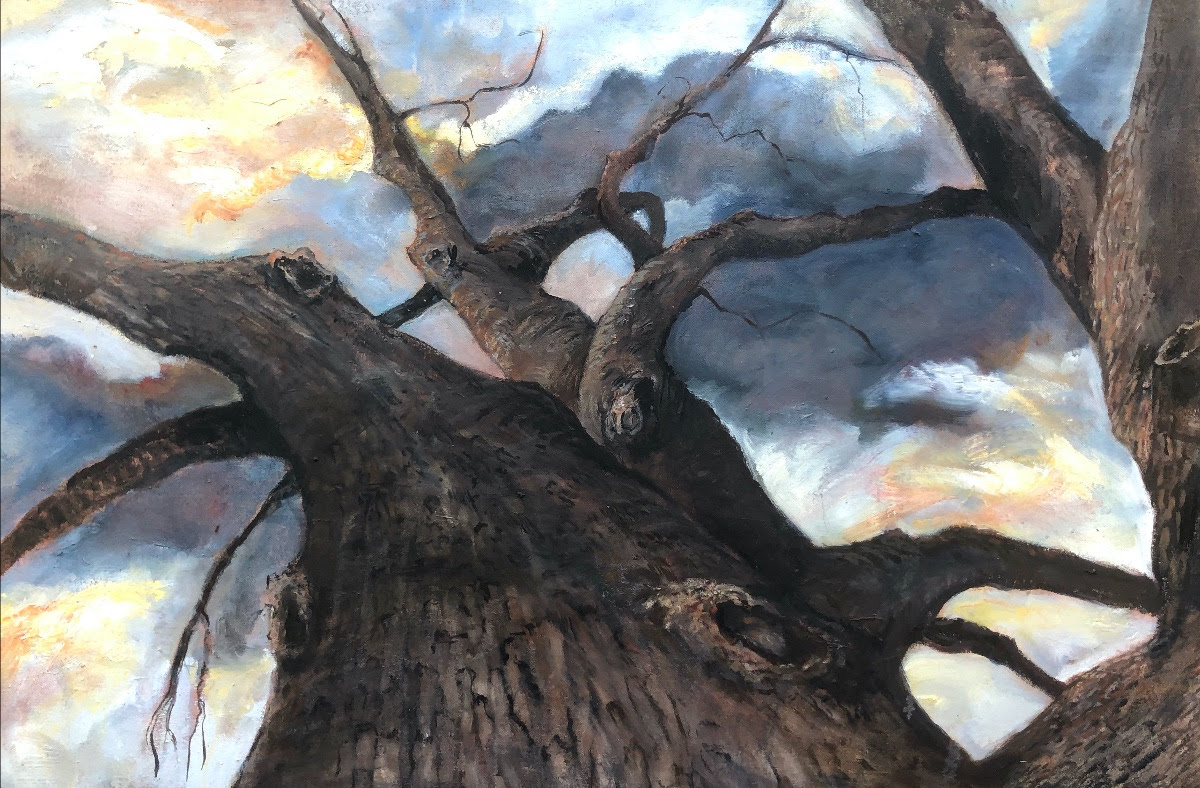 You can learn more about Sally Briggs and her paintings, photos, and assemblage on her site.

Sally Brigg’s exhibit at Heron Hall, the Laguna Foundation, is open until December 23rd. Because of the variety of hall uses during the week, please call Maggie Hart, Outreach Manager (707) 527-9277 ext. 3 to ensure access. She will offer you options. Or email gallery@lagunafoundaton.org

how little it takes to be

grateful for button seeds that unfurl into wisteria
or burgeon into pillars of eucalyptus in the fog
to thank grasses velveting green the fire-shorn hills
to love a sun that insists on coming back
no matter how dark, how long, how cold the night
and wind that dispels smoke to unbind the skies
to love the yes that follows every no
to praise persistence in all its shapes and sizes
the weeds that stubborn up between cracks
nectar of the thousand flowers a bee will sip
to make a single drop of honey
the fact of it alone enough to say
how thankful the tongue
how dear, how sweet the smallest taste

From the 2022 Anthology The Freedom of New Beginnings: Poems of Witness and Vision from Sonoma County, California