↓ Skip to Main Content
Home › October 2020 | Interview with Kamala Bennett, Landscape Designer – Part I: I became very aware of the potency of crafting space and how transformative it can be, both in positive and negative senses.

October 2020 | Interview with Kamala Bennett, Landscape Designer – Part I: I became very aware of the potency of crafting space and how transformative it can be, both in positive and negative senses. 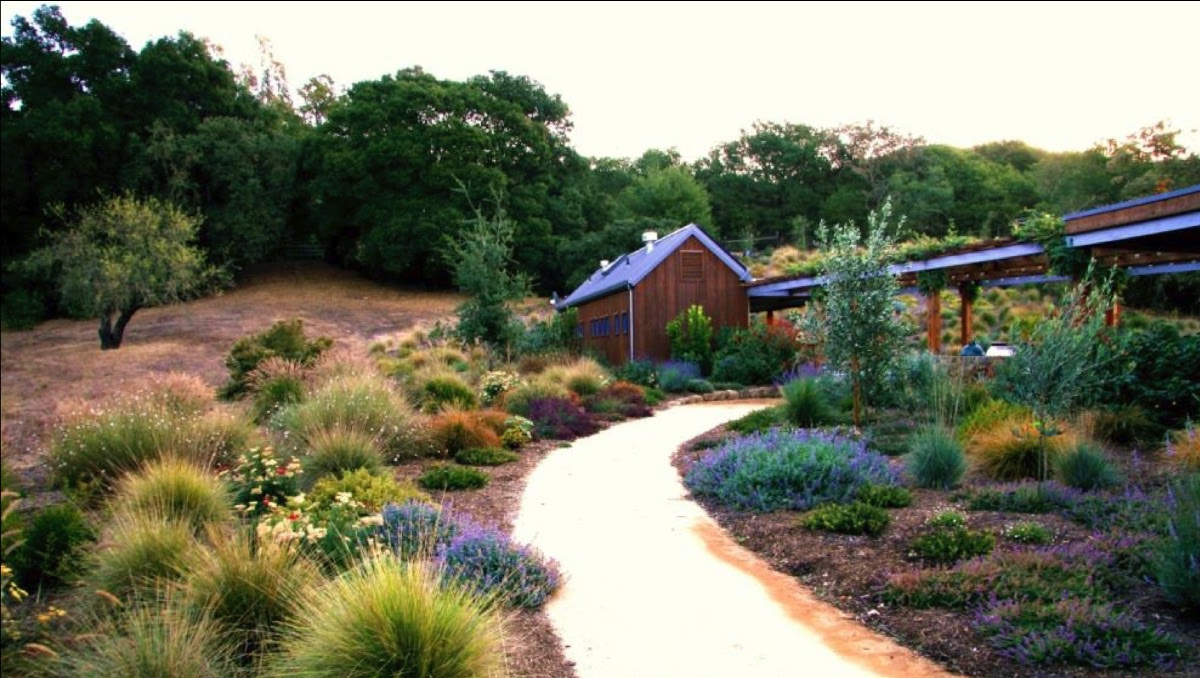 A 30-acre residential project in Sonoma includes many perennial edibles, a six-acre specializing in heirloom vegetables and fruits, a living roof, bees, chickens, and rainwater harvesting.

I worked as a gardener some twenty years ago. One of my jobs was at a home in Sebastopol at the end of a lane that grew strawberries and other native plants in the front, and a myriad of wonders in the back, along permaculture principles. The place really stood out. It felt and looked so different from most of the gardens I worked on. After a while, I met Kamala and Geoff who had designed and installed it. Together they form Sentient Landscape. Here is Kamala’s story.

I spent the first years of my life on the East Coast. When I was seven, we moved to Southern California where we camped in a local park until we bought a cottage in Trabuco Canyon, adjacent to the Cleveland National Forest. We had traveled with our horses, cats, and Russian Wolfhounds across the country and we then added a flock of chickens. Each of my parents had their own intimate way of being in relationship to the natural world, my father through trees and fruits, my mother through animals.

As a young child, I freely explored creeks, climbed the huge, old live oak trees, and went on long trail rides. I loved to rake meticulously. I would spray down the gravel and dust and create beautiful patterns. This became my regular contribution. We had terraced stone walls which I would reorganize and admire from all angles. I spent long hours communing with the chickens. I remember once sitting on a bucket in the coop quiet and still for about ten hours tenderly protecting a chicken when she was unwell. She died and I sat with her. I also loved to lie on the bare back of my horse, Sir, for hours, looking up at the sky and feeling his movements.

We found a more remote, raw piece of land a couple of miles into the forest and began the decades-long process of building a large and unusual house and developing the property. We collected hundreds of stones from the creeks, huge beams from old warehouses, recycled windows, and wood flooring. The house wasn’t completed while my family lived in it but there was always an active focus on moving the huge project forward, enhancing the beauty, harmony, and function of the place. So, I was given many opportunities to be involved. From an early age, I was moved and motivated by the pleasure and possibility of creating in relationship to place, finding deep calm communing with plants and animals. There was a porosity between the wild environment of the dry rugged hills that surrounded us and the living space. This interrelatedness felt dynamic, spacious, connected, and safe. Wilderness has always seemed safer to me than urban settings. I lived in LA and New York for years and benefited from the cultural resources of urban living, but feel most at home in a place that is both wild and cultivated where I can dissolve into nature and reemerge restored and inspired. 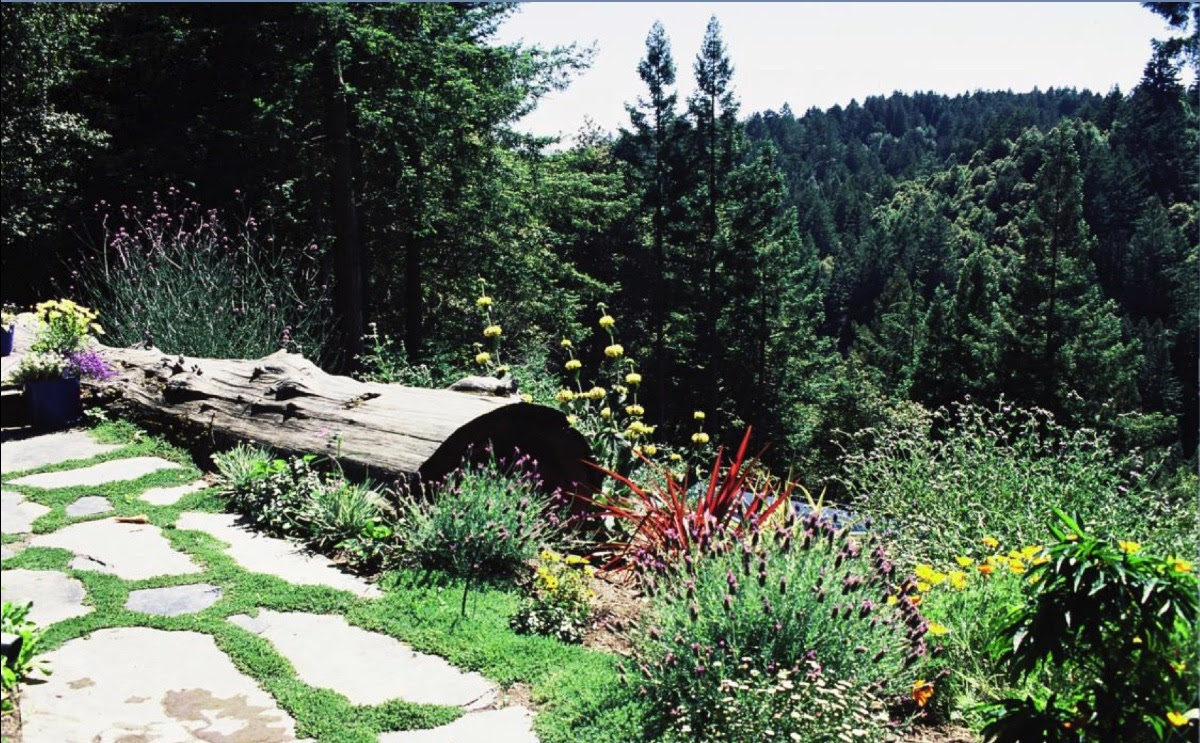 Residential project in Occidental. The log has many functions, as a seat log, a soil retention strategy/ retaining wall, stores rainwater, creates habitat, and provides a beautiful and significant presence.

From early childhood, I was nourished by dance and theatre. I studied ballet intensively for 15 years, and was in a traveling children’s theater group. I went to a small, liberal arts college, Drew University, to study art history and ended up doing an internship in New York in fashion design, but didn’t find it compelling. I transferred to UCLA as a World Arts & Cultures student with an emphasis in anthropology. I wanted to get a Ph.D. in anthropology and create ethnographic films that explored significant cultural content while really emphasizing an exquisite film and musical experience. I was convinced that the beauty would reach people more deeply and amplify the content. I still believe that!

I got involved in the Hollywood film industry as a production assistant, but when I discovered set decorating and finally production design, it was a natural. This work, manufacturing environments, demands rigorous creativity, and spontaneous solutions. It was a highly collaborative and layered process. For example, to create the saturated richness of a 19th-century opium den with tattered velvet and dark carved wood. I became very aware of the potency of crafting space and how transformative it can be both in positive and negative senses.

I noted the tremendous waste in this industry. We worked on a Nike ad, for instance. We built a swimming pool on a sound stage for a 1940’s style water ballet scene. After two hours of filming the set was dismantled. The water was pumped out onto the concrete. All the brand new plywood was ripped apart and put in a dumpster along with the huge plastic liner. Yet, the commercial was really successful. The waste was never acknowledged or considered.

I wanted to leave Los Angeles and take myself to a spiritual place. My goal was a community with delicious natural food in a wild setting with a true heart. I ended up at the Tassajara Zen Mountain Center in the Ventana Wilderness above Carmel. Though I had been drawn to Buddhism, and to this place specifically, I don’t think I really understand where I had landed. I was pretty glamorous back then and I chuckle now thinking about my bright, flowy wardrobe that first summer at Tassajara. Onion skin layer after onion skin layer comes off until your expression of who you are changes. I was 26 and spent five months there. The flow of the meditation and work schedule, the sound of the bells and gongs, the silence, these are the shared supports of the practice– the lattice that each person, a unique and beautiful vine, grows upon. 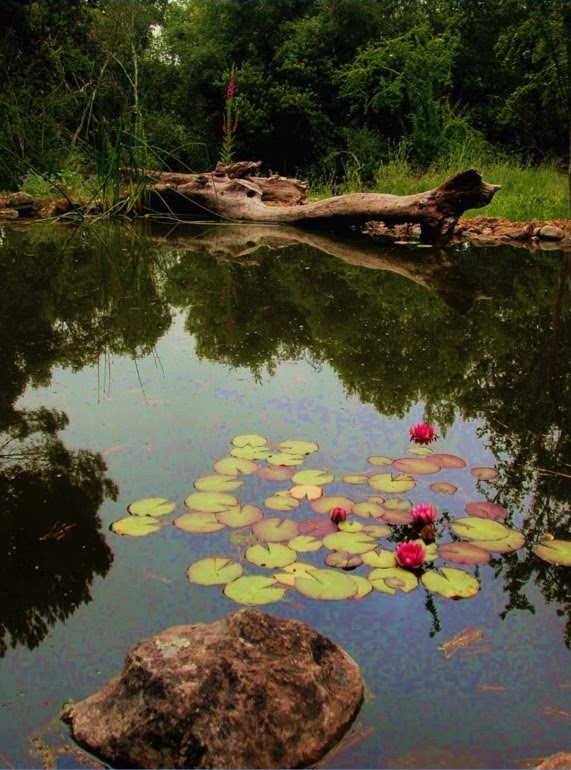 The pond is spring-fed. We chiseled it out of rock. It was about 75 feet x 35 feet. The tree had fallen and we placed it at the pond’s edge, making a wonderful seat to slide off and slip into the depths. Immediately after construction, it welcomed a native turtle, a host of water birds, and other local native animals.

My teacher would ask, “What is most important?” It seemed easy then to answer in total authenticity, Awakening is most important. And, A life in service of awakening. This is still my authentic answer to the question, but the context of my practice is now quite different: mother, wife, community member, land steward, business person, activist. I have goals in my work, but they are not about personal ambition, more like personal evolution.

At Tassajara, I worked in the kitchen. I loved to cook nourishing food prepared with intention. I was a vegetarian. Food as a healing art form is a huge focus and delight in our family. I was impregnated by the overall aesthetic at Tassajara. The space around shapes. I loved the quality of the wood in the Zendo, worn and polished by bare feet. It was earnestly used, tended, and respected.

From Tassajara, I decided to go to the Green Gulch Zen Center for more formal Zen practice. I did several practice periods and then became a farm apprentice which was a six-month program with a pod of people working a 10-acre organic farm. It was physically challenging because of the scale of the heavy work, but I learned so very much. I stayed at Green Gulch as a resident Zen student working/practicing in the garden for three years.

During this time, we had a Growers’ Gathering of perhaps a hundred farmers. There was some sharing, some education, and socializing, and every part of the meal had been harvested by the hands of someone who was there, even the salt! I met Geoff here over a cup of herb tea in the garden. It was definitely a moment of recognition. He came with Penny Livingstone who, along with James Stark, founded the Permaculture Institute of Northern California in Point Reyes. Geoff went on to work as an intern at Sandy Bar Ranch, a wonderful permaculture site on the Klamath River, where I visited him.

We moved in together into an Airstream trailer in Point Reyes at the Permaculture Institute. We worked with Penny and James as associate directors developing the site and we offered many Permaculture courses such as Gray Water, Natural Building with Cob and Strawbale, and Permaculture. We built two straw bale buildings with a pond right outside our door, surrounded by an abundant garden. It was magical.

Penny also had a sustainable landscape business and Geoff and I did design and installation. It was a period of incredible growth and learning about permaculture, landscape design, and the hands-on experience of running a business. Penny is a courageous and adventurous woman. We once got a job and she, without hesitation, said, “Sure, Kamala can drive a tractor and do the grading.” When we arrived on the site my tractor job turned out to be an intimidating, muddy, uneven field full of tree stumps and rocks! It was quite the job!

Geoff and I used to walk twenty or thirty miles a week in Point Reyes National Seashore studying the water flows, stone formations, and ecology. There is so much oxygen out there! We learned so much.

When it was time to move on, Geoff and I went on a tour of the Pacific Northwest exploring different forests and communities as possibilities for a new home base. We came back to West Sonoma County and found the landscape here felt really resonant: both soft and wild, just remote enough but connected to community. We started our business, Sentient Landscape. The name reflects the essence of the work, namely, to create conscious landscape, to cultivate a regenerative living system. 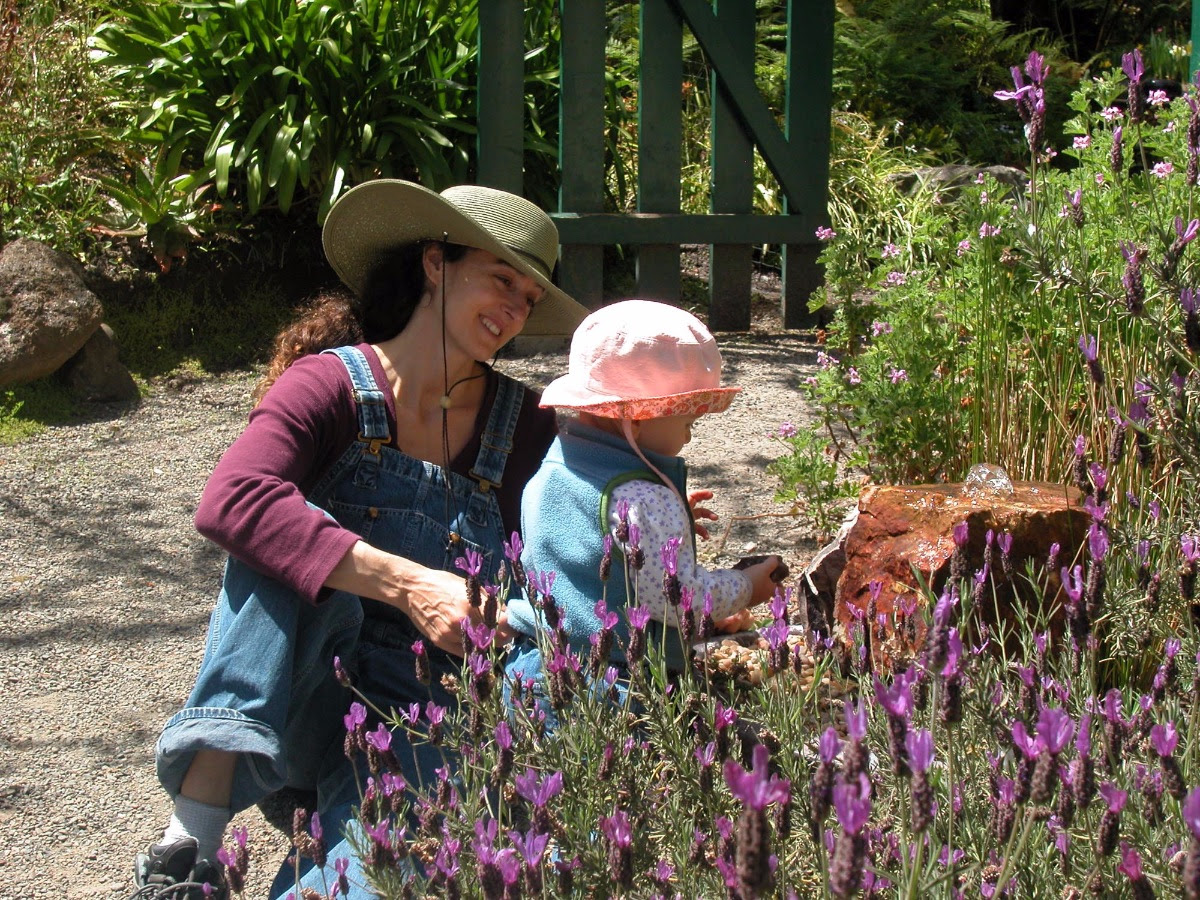 Kamala and her daughter in the garden.

I’d like to recommend a video, Part 2 of What is Mine and Ours to Do About the Ecological Crisis? by the Inayatiyya Kinship. This video is presented by Shams Kairys, who gave us a profound interview ‘Responding with Love and Courage to the Call of the Global Ecological Crisis’ in July and August 2020.  Highlights include Helena Dokku sharing her work in England, report-backs from the small break-out groups, and a closing note by Pir Zia. Here is the link: https://vimeo.com/451637002/66e67f7ce9


When they first appear
tall, trumpeting summer,
naked of leaf, yet full
of intoxicating scent,
messengers springing
from the bulbous earth
peering through long grass
and beds, you wish they
would last forever, you wish
they would last forever,
knowing your own
period of grace is short,
like theirs, though we mark ours
with more seasons.

They will resurrect next year
while we? The mystery blows
far ahead. Only inner knowing
might catch a glimpse of pink
and deeper pink
swaying on a stem.