The Ceres Project is an amazing undertaking that serves nutritious meals to individuals—and their families—of whom at least one member has a serious or chronic illness such as cancer, diabetes, or a heart condition. Ceres serves around 250 families a week in Sonoma County and 60 families in Marin County. It has 450 youth and 600 adult volunteers annually and 46 staff. After an operation I had in 2008, Ceres volunteers delivered freshly cooked meals to my door for six months. What a lifeline!

The heart and engine of Ceres begin with the teen volunteers. Deborah Ramelli, Ceres’ Communications Director, put me in touch with one of the teen volunteers, Glynna Nathan. This Part I will focus on my interview with Glynna, held at the Sebastopol Ceres garden. In Part II, Tina Green, Ceres Program Director, will share her experiences and perspectives. 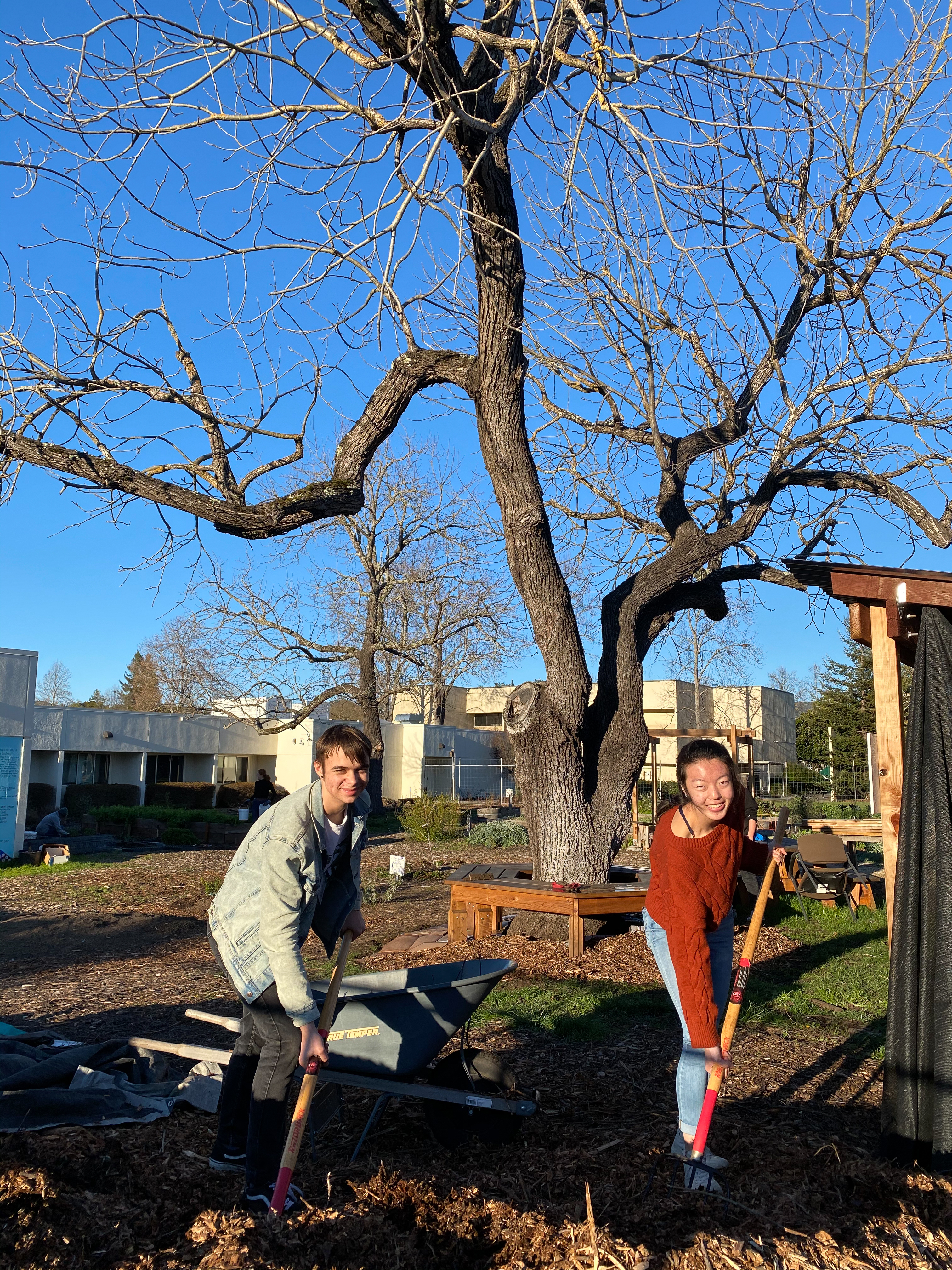 Glynna began: The Ceres garden is ten years old. Sara McCamant built it from scratch. (Sara is the Garden Program Manager.) There are three-hour shifts in the garden, from 3 – 6 pm, during which youth volunteers harvest, weed, and plant. We have seven chickens at the back of the garden.

I heard about Ceres in my freshman year at high school. There were posters in the rooms encouraging volunteers, and I knew people who had done Ceres: everyone gave it a positive review. I started at the end of my freshman year in May 2019. Initially, I wanted to learn to cook. I stuck around because it felt really good to be a part of the community and help people in a tangible way—local people, and I also loved the garden. I find it very peaceful and relaxing. Sara is an amazing person!

So I started volunteering in both the kitchen and garden, spending one week in each. [We pass by prolifically flowering borage as we talk.] We keep the soil covered with flowers and many plants that attract pollinators. We learn about drip irrigation on a timer, and how to fix it. What we learn is very practical—small-scale agricultural skills.

[There are many tall, purple amaranth growing in the beds. I notice the beans on a metal trellis.] We build the structures for the beans, and also the raised beds. Sometimes, when there are signs of gopher plant damage to plant roots, we flip the bed over and replace the gopher wire. [I am looking at a twenty-foot bed.] It can take a day. As a teenager, it shows you can do it and you can do a lot more than you thought you could. 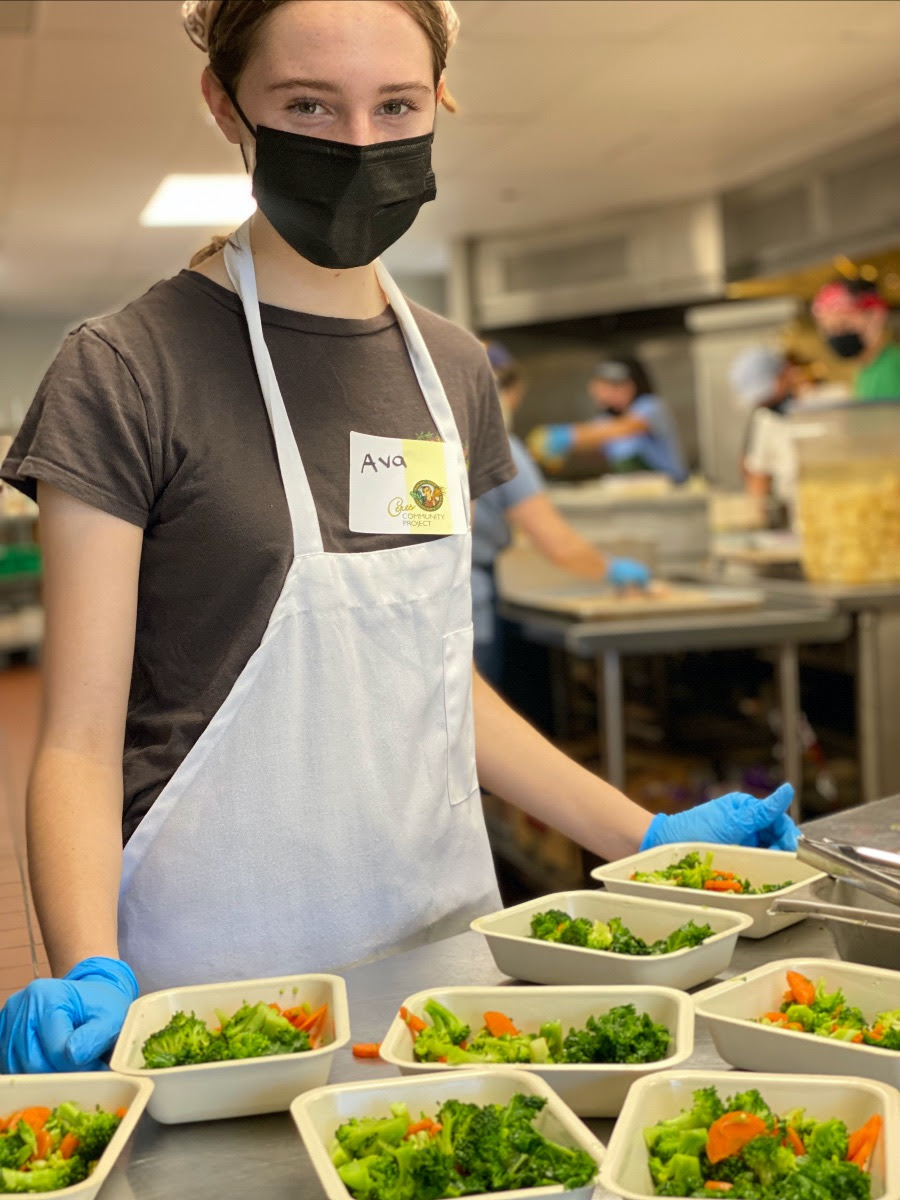 Ceres has a Teen Leadership program, and after a year you’re eligible to become a Teen Leader and to mentor other teens in the kitchen and garden. I’ve learned confidence in leadership among peers and also talking in public. “We’re empowering the next generation,” Sara likes to say. Before Ceres, I had never talked to more than five people. Ceres empowered me to be able to do necessary things for life. You learn a lot of job skills here.

In winter, we’re prepping for spring, planting cover crops, etc., but In heavy rain, we don’t work. The garden can rejuvenate itself without our interference. There are four compost piles. Scraps from the kitchen are brought here. Two of the piles are ready to be added to the beds. We turn the pile every couple of weeks. When I did it last, there was a huge rat nest in one. It’s a collaboration with nature! 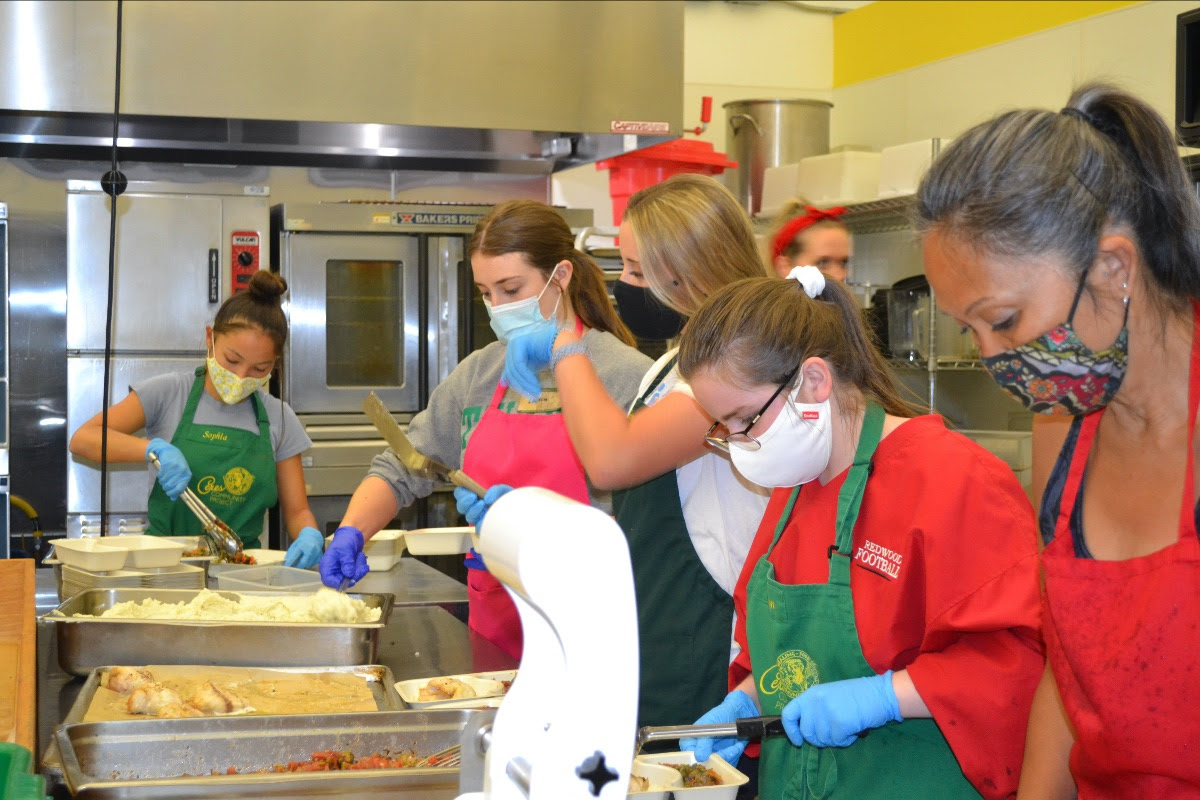 I’m not a really good cook but I did learn in the kitchen. The kitchen is very welcoming and fast-paced. So, you learn a lot very quickly. It gave me confidence in my cooking. There’s a prep shift where we wash and chop vegetables and kale. On the cooking shift, we work from a recipe with two or three people, including a team leader who knows how everything works.

There are adult mentors and staff in the kitchen as well.  Adult volunteers in the kitchen work in the morning or on weekends. My mother joined Ceres as a volunteer at the same time as I did. My sister, 16, was involved for a while too. Also, kitchen assistants were created as paid positions during Covid. They are often former teen leaders.

Ceres has quadrupled its meals. I was involved for a little bit in the kitchen during the pandemic but mostly in the garden. We started wearing masks. Many teens stopped volunteering because of the pandemic. We had to harvest more to meet the demand from the kitchen. Adult volunteers came, and we also got food donations from outside. 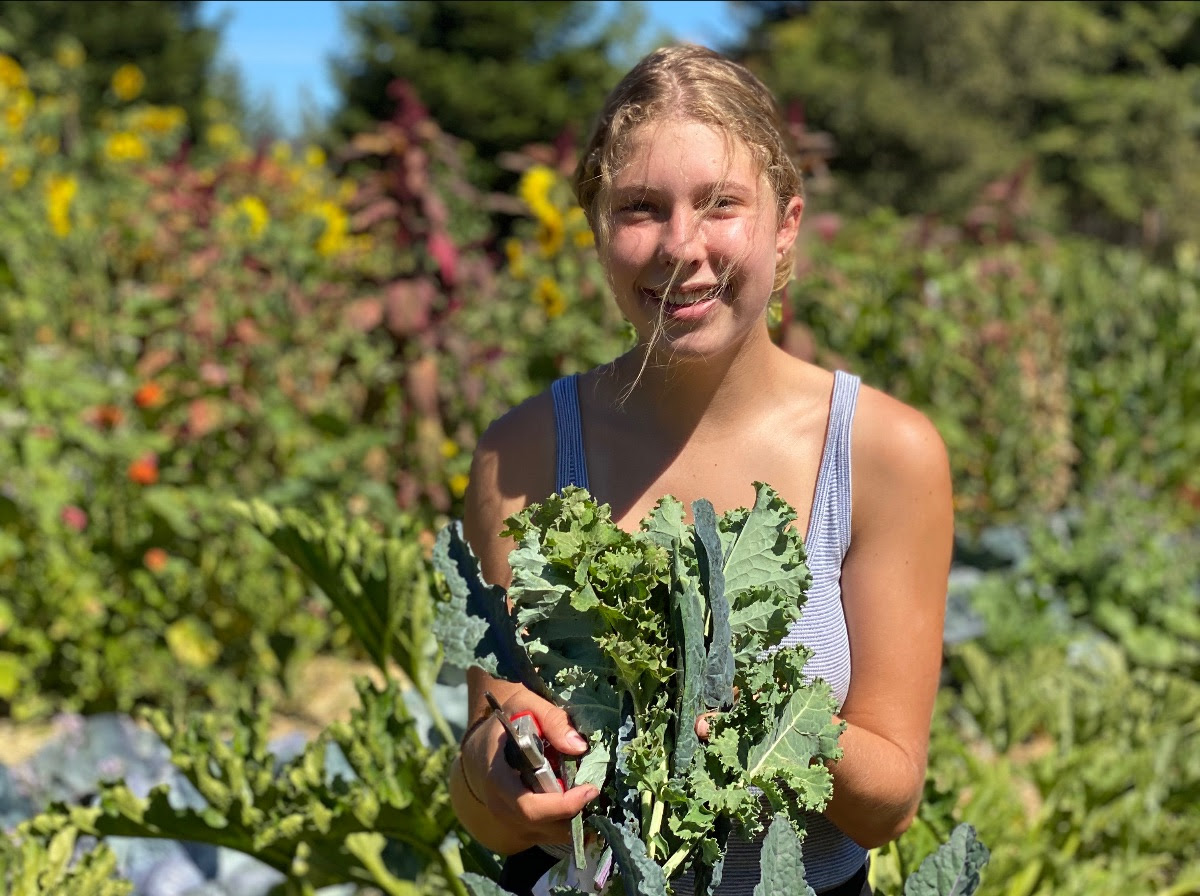 Another big reason I love Ceres is that I’m very interested in their input into state and national policy. A big part of the mission is “Food is medicine” and “Health through healthy food.” These have been scientifically proven. It’s really interesting to learn about it and it feels impactful and meaningful to be involved with a non-profit that contributes to the greater good.

Seeing how Ceres can affect the state has encouraged my interest in political science and policy work. Glynna is a senior and in the process of applying to different colleges, including some University of California locations.

The Ceres Project with the youth program and “food as medicine” model is being duplicated in nine places. I see this as evidence of great strides for Ceres’ vision and values.

I’ve met lots of teens from our nearby high schools. It’s a good way to make friends because it’s an easy environment that’s very inclusive and collaborative. The adult role models are very welcoming, too.

When I was very young, between six and twelve, I wanted to be an architect for a very long time because I really liked the blueprints. What I like about architecture are the planning and building. At Ceres, we’re working towards the same goals and building something. There’s a plan for each bed!

I can see myself, eventually, working for a non-profit. Ceres recently backed a measure to include medically-tailored meals into Medicaid, which passed!

To learn more about Ceres and the many ways you can support them,
please visit www.ceresproject.org

Bonnie Brooks responded to September’s newsletter: I would like to send you a picture of a nature mandala I created from the huge and majestic Mother Oak on my property. She also inspired me to write one of my very first poems. (Below is an extract from ‘Mother Oak’.) 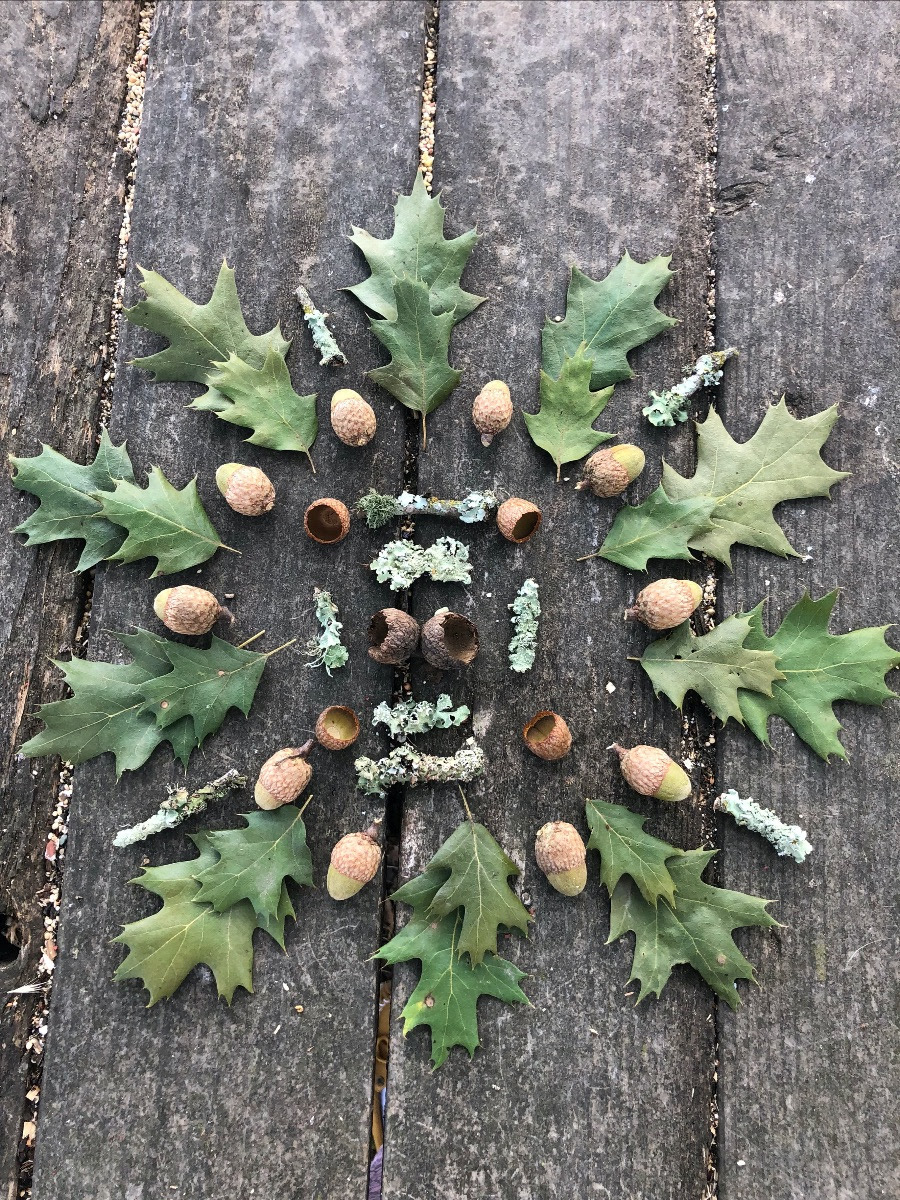 Today I gave you an offering of seeds,
Nuts, an orange, cornmeal, and dutsi,
Holy nectar pills
Sprinkled it in ritual,
A circle around your base

Prayers of gratitude
For your presence
Your strength
Your protection
Mother Oak, a queen