↓ Skip to Main Content
Home › February 2020 | Interview with design engineer, Laura Shumaker and Frozen 2: “My favorite place to climb is Bishop, California. It’s like going on a pilgrimage to a cathedral instead of weekly church.”

February 2020 | Interview with design engineer, Laura Shumaker and Frozen 2: “My favorite place to climb is Bishop, California. It’s like going on a pilgrimage to a cathedral instead of weekly church.” 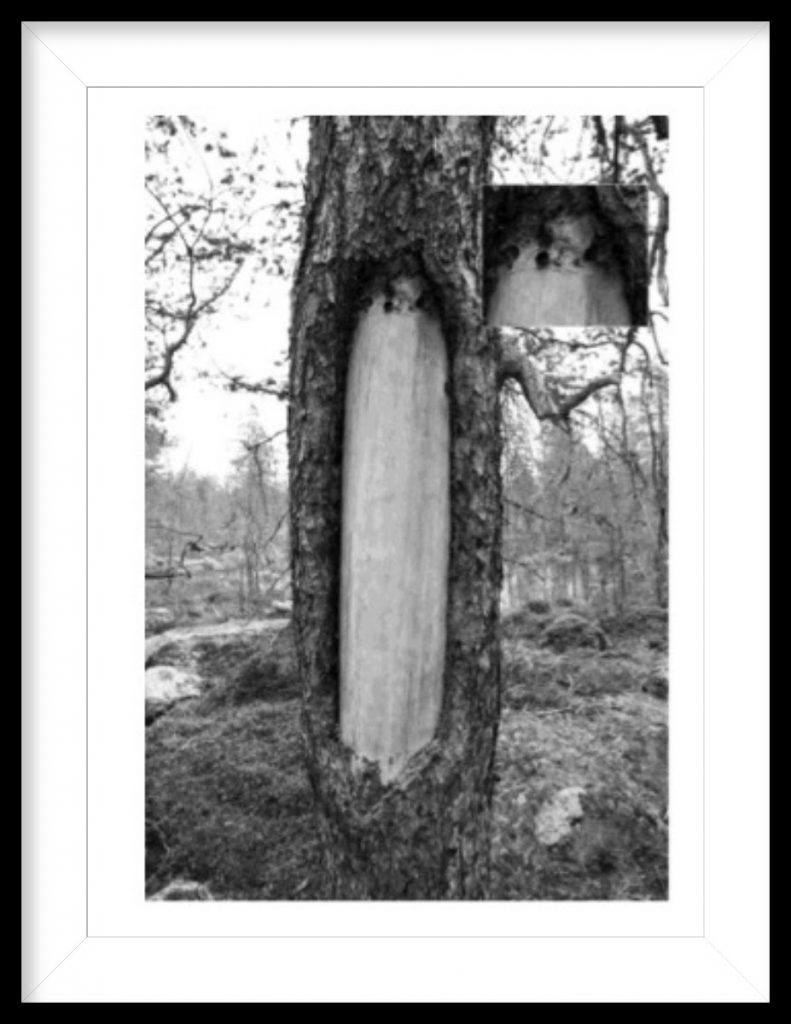 FIGURE 1.—Bark-peeling on live Scots pine in Tjeggelvas nature reserve, Northern Sweden, dated to AD 1777 and located in an area with more than 20,000 bark-peeled trees. Note the characteristic square/oval shape of the scar and the knife-cut in the upper part (insert). Trees with Sami bark-peeling scars are commonly located around traditional Sami wooden huts in old growth Scots pine forest. Photograph by Lars Ostlund. From Journal of Ethnobiology, Spring/Summer 2009.

I watched the Disney movie, Frozen 2, with my daughter, on a rainy day in Santa Cruz. Two themes emerged that I’ve mentioned in recent newsletters. Firstly, the Sami, upon whom the indigenous, nature loving people in the film were based. In December 2018’s newsletter there was a photo of a Sami herder and a discussion on indigenous peoples and “the very real challenges that modern first peoples face.” You can access it here. The Sami, you may recall, are indigenous to northern Sweden, Norway, and western Russia. The second theme, “Water has memory,” kept being repeated by the nerdy snowperson, Olaf. In March (at this link) and April 2019 (here), Philip, a landscape designer and naturalist, took us on a journey into Water, and some of its profound qualities, such as memory, intelligence, consciousness. The film showed me that it can take a relatively short time for that which appears to be on the fringes of consciousness to penetrate into our collective realities. And that gives me hope, even as the same is true for darker forces that we are experiencing in our current political climate. 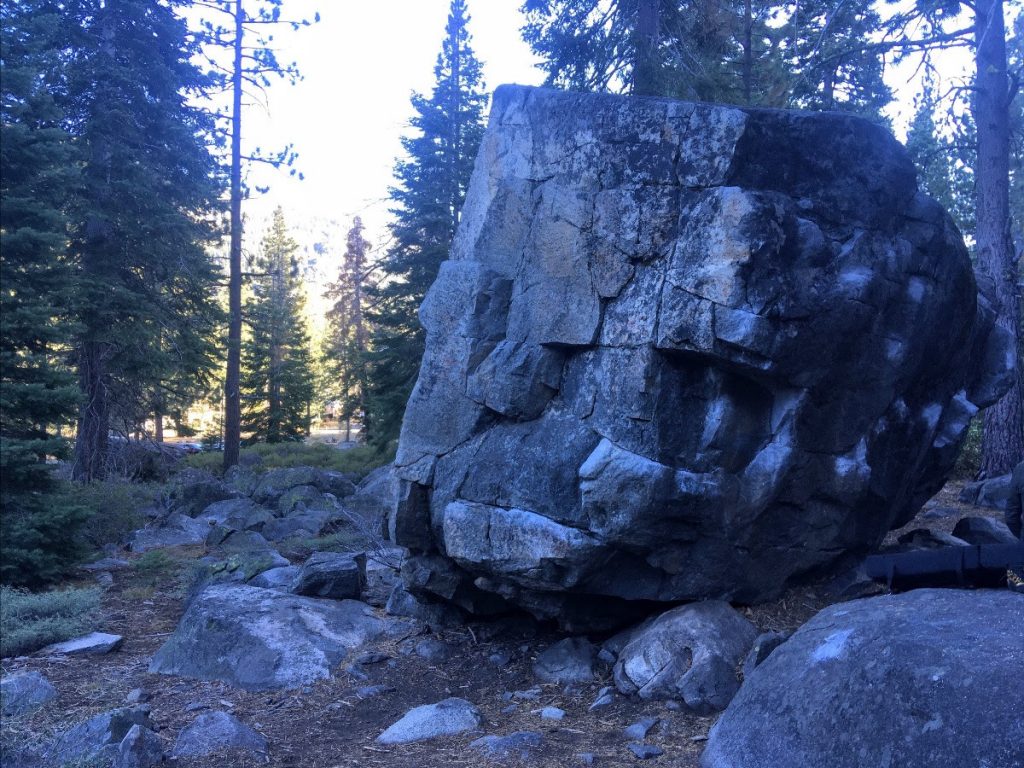 A boulder with lovely climbing from Tahoe Photo by Laura Shumaker

When I mentioned these two themes to my daughter, she remembered her close friend, another millennial, Laura Shumaker. I called Laura and asked, How did you hear about the Sami?

I listened to a podcast that tackles pressing environmental issues. It profiles people, including the Sami, near the Arctic and their use of the land and trees,. I read a paper, Bark Peeling, Food Stress and Tree Spirits – The Use of Pine Inner Bark for Food in Scandinavia and North America. I was so intrigued that I got in touch with one of its authors, Professor Lars Ostlund and visited him in Sweden. I went on with my friends to Ajitte in Northern Sweden. I wanted to connect with The Sami Keeper and her daughter, guardians of the Sami knowledge, but it didn’t happen for a variety of reasons.

I’ve listened to a few episodes of the podcast Laura told me about and highly recommend its blend of reporting on climate change through the issues facing those who live around the sub-arctic region. In particular, I was very moved by Season 2, episode  6, that follows the story of the Aleksandersens, a Sámi reindeer herding family in northern Norway and the Extra 02: Blowing in the Wind: Aleksandersens Update at https://www.thresholdpodcast.org

Laura explained about the paper she’d read; Professor Ostlund collaborated with other researchers on the use of pine trees for food, mostly the Scots pine in Scandinavia. The bark was collected at a very specific time of year for winter use. Indigenous People would cut into it until they reached the sapwood which is soft and juicy. This inner bark, called the cambium, they could eat it raw, or dry it and pulverize it to put in soups. Their diet was rich in lean meat. The cambium has a bunch of vitamins, including vitamin C, minerals and carbohydrates to balance their diet. Indigenous peoples in North America also used almost identical techniques. 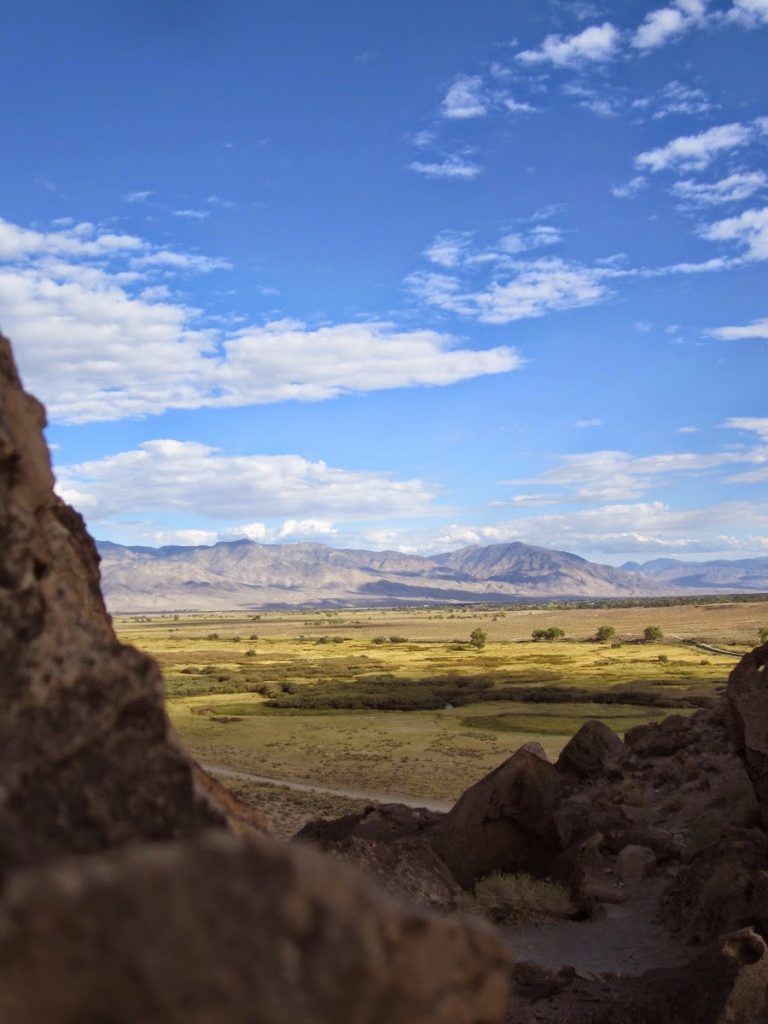 Bishop, view from the boulders – Photo by Laura Shumaker

Laura graduated in engineering and worked for a year for an engineering company in the Bay Area but wasn’t feeling very fulfilled. She turned her creativity toward her passion for rock-climbing by designing and making her own rock-climbing shoes. I asked Laura, What turned you on to rock-climbing?

A few friends at college were doing it, and I met a friend who was an avid climber. I was having trouble turning off my brain when running and swimming. I found that rock-climbing was a moving meditation. Instead of a mantra or breath practice, it involved exacting movement and total absorption in the moment, so my mind was both attentive and relaxed rather than continuing in the same old rut.

In my junior and senior years, I’d climb three times a week for two to three hours. The vast majority was in the gym. Outdoors, there wasn’t as much freedom in a certain sense because the consequences are so much greater when you fall.

My favorite place to climb is Bishop, California. It’s like going on a pilgrimage to a cathedral instead of weekly church. There’s an elemental sense as you enter the space of this ‘cathedral’. Just the beauty of the place! This form of ‘bolder’ climbing is typically with a group and so it’s a very social experience. We’re problem solving, joking, offering support. Being outside, people take time out of their regular lives. We camp together.

I worked a whole year designing audio products. I didn’t feel a passion for the products. I had had the idea for rock-climbing shoes in late college and then came back to it. I left work, raised some money through crowd sourcing, and talked to people. One of my sister’s friends was excited about it and did an internship for me for free. We went to Las Vegas to see how a custom shoemaker operated, and he made the first two prototypes and we learned some valuable things. At the end of that summer, I kept working and the idea evolved, and I basically did that for three years. I discovered how much I cared about the human body interfacing with the environment through footwear and clothes. For example, when you go to inhospitable places, such as cliff faces, footwear and apparel can become critical.

When three years elapsed, I couldn’t take the business any further, so, I made the hard choice of dropping it to further my own skills. (You can see Laura’s legacy on making rock-climbing shoes on her site SFT Climbing.com at this link.) 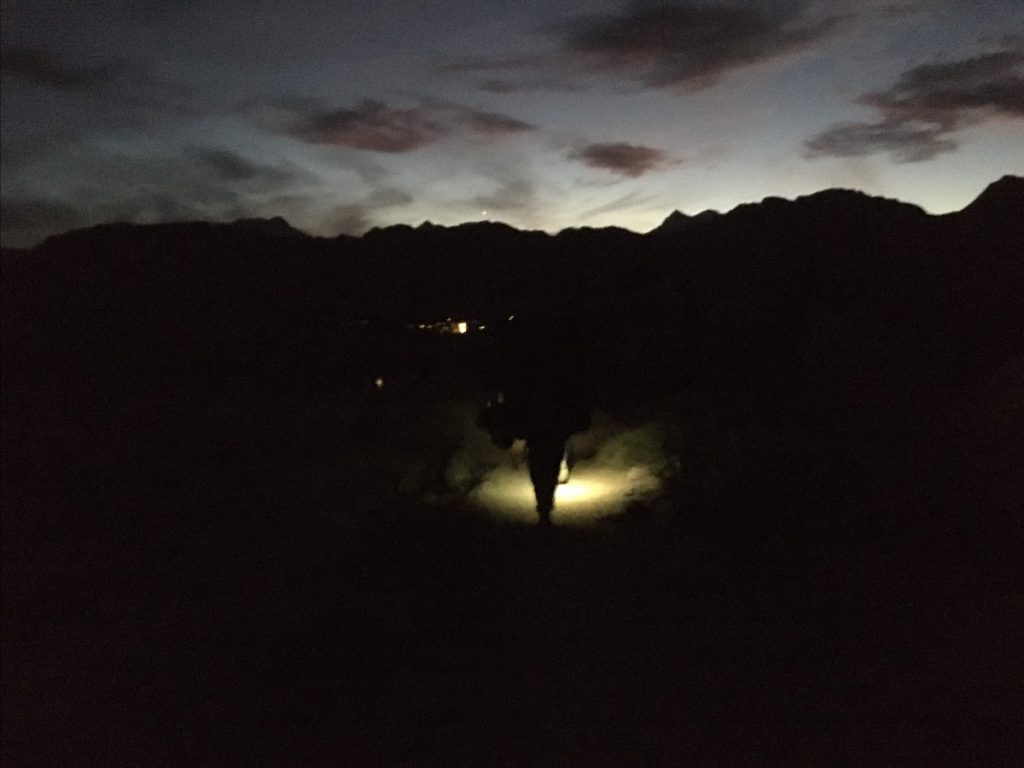 I now work for a large Silicon Valley company. I work with textiles that have dual purpose function as well as aesthetics, usually on the surface of devices — speakers for example. A lot of synthetics aren’t recyclable because they combine different kinds of fibers and may add buttons and trims. For instance, polyester, cotton, and spandex can’t be mechanically separated. My department has a strong sustainability purpose. I focus on how much energy, raw materials, chemicals and pollution are involved in the processes.

My department sets goals, for example, as to how much recycled plastic to use, and it’s up to the engineer to work toward that goal by choosing yarns for particular feedstocks. My team works on where we get the yarns from to make it 100% recyclable. For instance, Patagonia has made jackets for years from recycled polyester. The engineering team considers all the inputs to recycling and disposal.

In a way it’s a return to where I started. I’m working with a particular kind of component that I’m interested in and care about, enabling the process so the materials that go into the products are sustainable.

Do you still rock-climb?

I go twice a week in the gym and I’m making my annual pilgrimage to Bishop, California in the New Year.

Two weeks before the devastating Camp Fire in Paradise November 2018, I had my right knee replaced at Feather River Hospital in Paradise. I was home in Chico for weeks while the fire raged and the impacts to both Paradise and Chico developed. There wasn’t anything I could do, immobilized at home, but to watch the news and offer what little emotional support and money I could to friends who were impacted directly and those working to help.

I’m currently Program Manager of a Wellness and Recovery Center that serves the mentally ill. Its focus is on peer-led groups and activities where 65 people a day are currently served. It’s a big job and I have to work hard to take care of myself. My go to for that has always been time in the wilds.

This issue of your newsletter really hits the spot for me! I just committed to doing a Vision Quest this summer to honor my upcoming 66th birthday. It’ll be especially sweet as I’ll return to an area where I went on my first Vision Quest back in ’94 to honor my 40th birthday! I really appreciate the questions that Leslie talks about needing to reflect on at this new crossroads:

“What is my role in this most significant time in human history? How can I make the greatest impact?” In many ways, it was a variation of my question from almost 40 years earlier: “Where and how could I be of greatest service?”

I’m approaching [the goddess] Hecate’s Crossroads. I want to use the quest to clarify what path I want to take. I can’t continue to do the work I’m doing indefinitely. Butte County has some of the highest ACE scores and poverty rates in the state. It’s just too much for me energetically, emotionally and physically—and it doesn’t fuel me like it has in past years. I long to live much more simply and devote more time to prayer, meditation and doing artwork—and to be around and collaborate with healthier people.

I’ve attached a couple of collages I made this year.  These are photos taken of actual cut and paste work in a 11″ x 14″ format.  Making them is a form of self-care.

Bountiful blessings to you this New Year’s Day!! 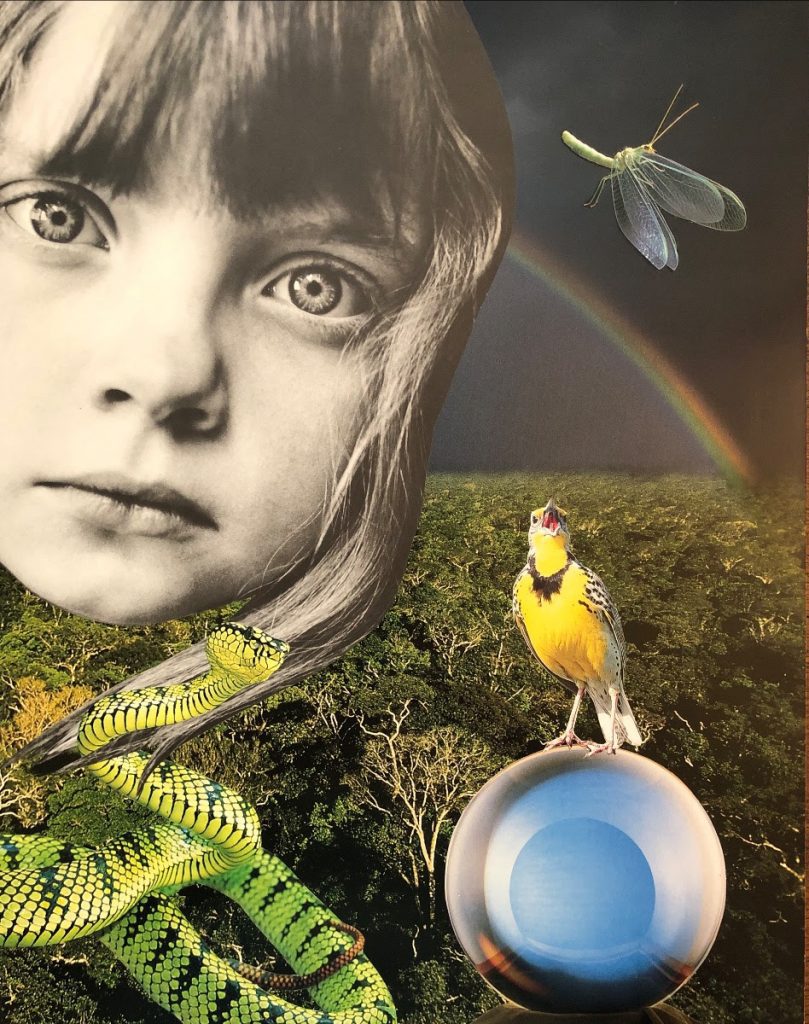 Lifting As On Wings


Lifting as on wings, drift
above the hill and hover,
at ease, melted and tender,

not having to be hungry or keen
like a bird of prey or any other,
simply float and hold, rest

just there, at the hinge of the view
where the slope curves north
and spills into the valley further,

where the ridges rumple and rise,
west above the pass, the place
where trails converge, here

land on the grand rock, held
in soil and serpentine, stand
on its ledge, its wind-weathered

skin, an ancient hunter’s perch,
taking in the distance where earth
and time stretch – along that edge

unfolds your quest, sweet pilgrim.
And there, all the while, the oaks
and bay, the days abide.